« Re-Visiting Craftsy Unlimited: Read the Comments Before Taking the Plunge
Surprise FREE $6.95 Pattern For You: We Want Everyone To Win On Mother’s Day! »

My family and I traveled to Switzerland for, among other things, a visit to the Bernina sewing machine factory in Steckborn where we were able to take the full factory tour.  I'd like to share this wonderful experience with you all.

The Bernina factory lies on the shores of Lake Constance, just 1.5 hours by car northeast of Zurich.

My husband and I lived in Switzerland many years ago when he was in business school and I was learning French, so I feel I know Switzerland quite well and find it very comfortable.

It was July and the Bernina factory is normally closed for visitors then, but since we had come from so far, Matias the Head of the Marketing Department agreed to have someone meet us at the factory.  (It probably also helped that I have a sewing blog with s few million readers, but who knows..)

When we arrived, we were greeted by Matthias Fluri himself who is in charge of the Marketing and Sales Support worldwide.  His passion and enthusiasm for his job did not go unnoticed and was quite contagious, frankly.

Don't get me wrong, it's not like they started up the whole factory just for us –it is a factory after all and there is always something to do, so some of the workers were still around.  We later learned in the tour that the factory had been in the lovely town of Steckborn since 1893 when it was founded by Karl Friedrich Gegauf the inventor of the hemstitch machine.

At that time, the machine could stitch up to 100 stitches per minute which was amazing by the standards of the time.  By 1900 the factory employed 70-80 people.

I wrote an introductory article called: For Fans of Bernina Sewing Machines before my visit, that proved to be very popular with our readers.  Please have a look for some extra background on Bernina.

For Fans of Bernina Sewing Machines

I was anxious to find out why an owner of a Bernina sewing machine will not part willingly with one.  What is it about Bernina that makes it so reliable, efficient and worth a small fortune?  Of course, like anything Swiss, we have to start by understanding the culture.

View from the Church Tower

As we descend on to the small town of Steckborn situated by Lake Constance, it's hardly difficult to spot the factory.  The huge name written on the roof of the building leaves no doubt that you are arriving at the right place.  The town is a typical Germanic town in Switzerland, with its distinctive architectural details, well-marked streets, small cafes and the magnificent quality of life all centered around the lake.

We see tourists on bikes, cars navigating, and street lights changing, all synchronized with a precision well known to a Swiss person.  It is the only place on earth I have heard an announcement and an apology for a train being delayed by a minute or two.  Then to my surprise, the Swiss would ask: is it a minute or is it two?

The first thing that is very hard to miss is the huge model statue of the mighty 830 model as big as a billboard.  Oh!  The things I could make with this machine!

The entrance of the factory is decorated with an amazing display of old machines.  It's a wonderful museum that tells the story of the evolution of the sewing machine.

Included in the display is the first sewing machine to carry the Bernina logo which is named after one of the highest peaks in the Swiss Alps.

Our tour starts at the conference room where there is an impressive display of more modern machines that are available on the market today, including the two new overlockers released in 2016, the L-450 and L-460 models.

Inside The Bernina Sewing Factory

We were told some parts of the factory are off limits and some we were not going to be allowed to take pictures, still, we got to see the “no picture zones” where they were doing all sorts of secret R&D.  Here's what we could take pictures of:

The assembly floor where machines in the 700, 800 and Quilting series are made is impressive.  Antistatic footwear is required to go any further so we stayed behind the line. 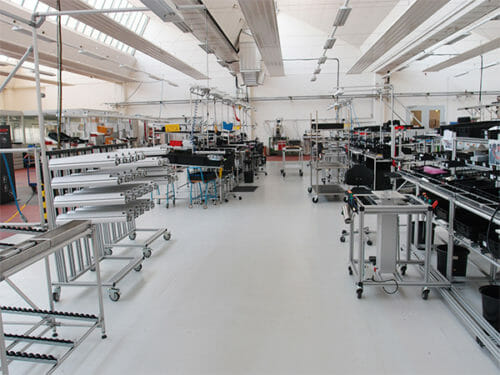 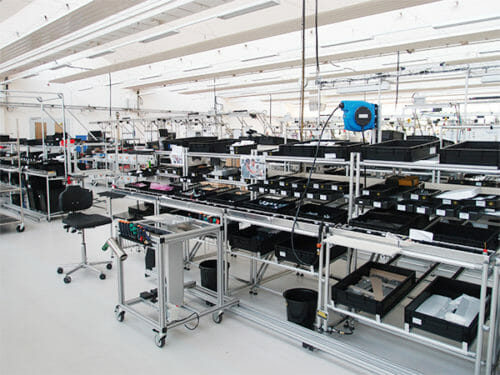 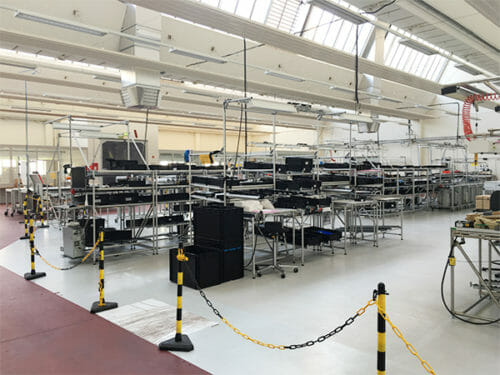 Bernina is the only sewing machine company run by the same family since its creation. The company has an apprenticeship program where kids start working and learning in the factory at the age of 16.

Amazingly the company has been able to retain most of the workers all the way until retirement, for some this is their entire working life.

Every worker puts in 40 hours of labor a week and can assemble an entire sewing machine by themselves, then the worker proceeds to sign the machine.

That way if something ever goes wrong (which is pretty rare..), the service center can trace it to the person responsible for the assembly of the machine.

There are special testing rooms where the machines are worked to exhaustion and monitored in climate controlled chambers until a piece is found faulty, then the design is improved and the process repeats.

Pieces and accessories are tested randomly so if one is found faulty the entire batch is then pulled back and tested.

Another way of testing the machine is to make it run a full work day for years to see what piece brakes then go back and try to make the piece better.

The embroidery machine below has been operating pretty much non-stop since 2011.  It is turned in the morning and is turned off when the last person leaves the room for the day, each and every day.  It has yet to fail.

At the time I took the picture this is how much the machine had worked.

This process makes for a product that is continually improving which is the reason for Bernina's well-known reliability.

I got a glimpse of the climate control chamber this is one of the areas where pictures are not allowed.

Our factory tour continued to over to the marketing and design department where I had the pleasure of meeting the Designers in charge of the Inspiration Magazine.

I would love to dedicate an article solely to them on what a typical workday looks like covering their creative process from sketch to the final photo shoot.

Next is perhaps the best part of the Bernina Sewing machine factory tour, the Creative Center.  There are courses being taught every day taught by experts using nothing but the best equipment. 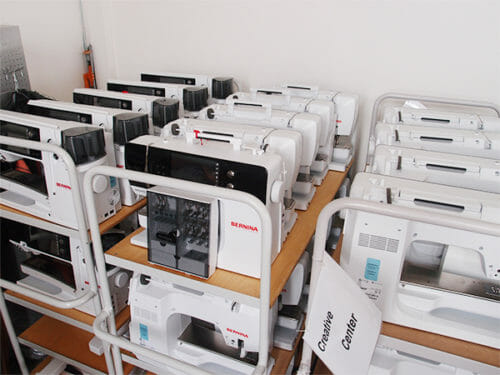 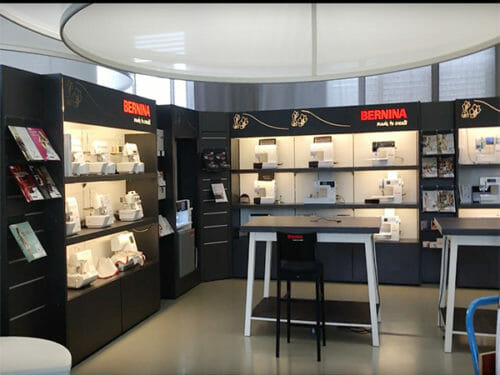 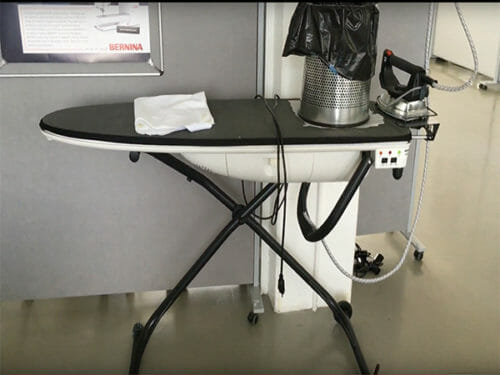 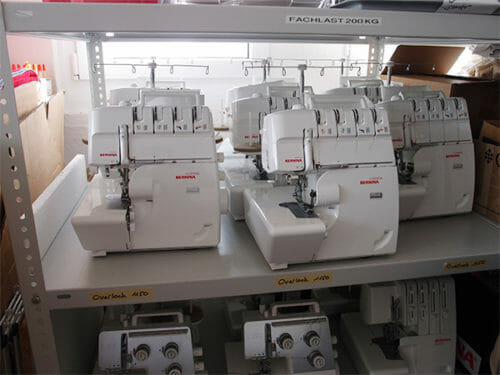 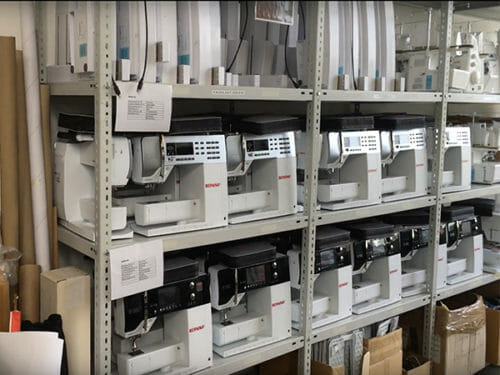 Aren't Most Sewing Machines Now Made In Asia?

Like all other sewing machine manufacturers, Bernina has faced cost pressures due to high wages and expensive real estate in Switzerland.  Long ago, all other brands from the US and other European countries moved all their manufacturing to places like China and Vietnam, under contract manufacturing arrangements, usually made by a third party.

Bernina did things somewhat differently though.  In 1990, Bernina established a wholly owned manufacturing facility near Chiang Mai in Thailand.  Among Asian countries, Thailand has a reputation for high quality while still maintain reasonable costs.  Bernina sent a management team to build the factory which they fully own and operate, allowing them strict control over product quality.  Swiss staff still manage the Thai factory and the company keeps close ties between the two facilities but with R&D remaining in Switzerland.

Many parts and subcomponents for the 700, 800 and Quilting series machines that are assembled here in Steckborn are made in the Thai factory, so the attention to quality control is constant.

This arrangement seems to have allowed Bernina to maintain their super high reputation for quality while managing costs particularly at the lower end of their product range.

Unlike some other companies we have seen, the Swiss staff seems to fully understand the necessity of having a sister site in Asia to allow the company to remain cost competitive.  This level-headed approach to business was refreshing to see.  It's pretty clear that without the Thai facility, the Swiss facility alone would likely not survive, so it is truly a win-win for everyone, including we Fans of Bernina who so enjoy their machines but need reasonable prices.

What Sets Bernina Apart From The Other Sewing Machines?

The Bernina B-9 Hook for perfect stitching.

Both innovative designs that are best explained in separate articles.

Other things to consider when looking at a Bernina: Cutwork Tool and Software, Paintwork, Crystal Work, 880 Stitch Designer and Color Wheel, and the Designer Plus Embroidery Software that includes Punchwork, Stumpwork, Trapunto and Raised Satin.

As any tour should end, we finished with a walk towards the lake to have our lunch with the magnificent view of Lake Constance and Germany in the distance.

I was invited to visit and report on the new Bernina factory in Thailand opened in 2015.  I certainly intend to take them up on the offer.  You'll read all about this in the near future.

How To Book A Bernina Sewing Machine Factory Tour

If you are anywhere near Zurich you should consider a visit and the factory tour or better take a class in this amazing facility to learn to take full advantage of the wonderful array of Bernina products.

You need to write or call four weeks before you intend to take the guided tour.  A large group will have a better chance to get in and the cost of the tour is supposed to cost 150 Swiss Francs per group.  They may be willing to waive the fee, particularly if you come with the referral of your Bernina dealer –or you could mention So Sew Easy which might help also ;).

There's additional information on the Bernina site at this LINK and on this guidelines PAGE.

Where's A Good Place To Buy A Bernina?

Get Your Bernina HERE

A Bernina Challenge For You

Hope you enjoyed our little adventure and got something from it.  Like I did in last Sunday's post about the Carpet Bag I have another challenge for you.

What do you think the lady in the picture sitting at the desk is testing? Please be specific.

The first to comment with the correct answer will get a free pattern from our Pattern Shop.

Until Next Time, Happy Sewing!

Bookmark the permalink.
« Re-Visiting Craftsy Unlimited: Read the Comments Before Taking the Plunge
Surprise FREE $6.95 Pattern For You: We Want Everyone To Win On Mother’s Day! »

81 Responses to My Bernina Sewing Machine Factory Tour In Switzerland