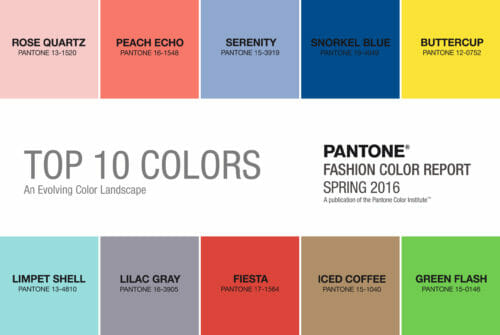 You are probably planning to welcome the spring season with a new project for your home or loved one, but before you go out and buy that fabric, it is perhaps helpful to know what the experts think are the colors of spring 2016.  You can also tell us what you think in the survey at the bottom of the article.

Every year, Pantone, a company that is best known for its Pantone Matching System (PMS), which is a proprietary color space for the printing and manufacture of paint, fabric, and plastics, declares what they call as the “Color of the Year”. They choose the year’s color by holding two secret meetings in a European city with representatives of color standards groups from various countries a year before. This group attends sessions where they discuss and debate what they think will be the dominant color for the following year. They look for color influences from various industries entertainment, art and other areas of design, travel destinations and new lifestyle trends.

Pantone has already announced its 2016 color of the year and for the first time they came up with two colors: Baby Pink and Baby Blue. Dubbed as Rose Quartz and Serenity, respectively, these colors are believed to dominate this year. Here is what the color gurus from Pantone say about these colors: 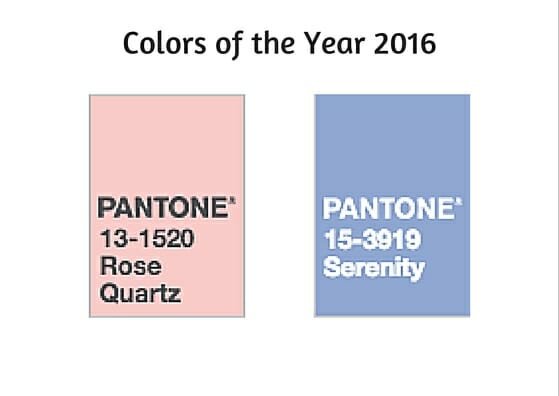 “Weightless and airy, like the expanse of the blue sky above us, Serenity comforts with a calming effect, bringing feelings of respite and relaxation even in turbulent times. Rose Quartz is a persuasive yet gentle tone that conveys compassion and a sense of composure.” 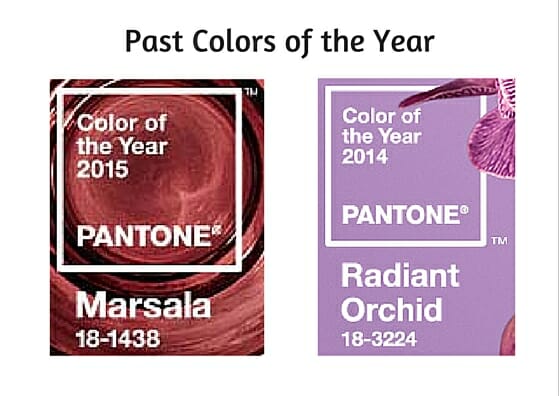 By the way, last year’s color of the year was Marsala, a deep, earthy wine color and in 2014, they chose Radiant Orchid, which is a bright purple color. Pantone’s color of the year is much awaited as it appears in many fashion runways after its announcement and is eventually used by various industries.

For the semiannual Fashion Color Report, Pantone has also chosen the top ten colors for spring 2016. These are:

Fiesta, which is fiery red as highlighted in Pamella Roland and Malone Souliers’ spring 2016 collections.

Snorkel Blue is marine-inspired blue and can be seen in Georgine, Tadashi Shoji, Whit NY, and Angelys Balek designs.

Serenity or baby blue is showcased in the works of designers Emilio Sosa, Rachel Pally, and Harbison.

Lilac Gray blends together pale violet and gray as shown by the spring collection of Karigam, Rebecca Vallance, and Yoana Baraschi.

Limpet Shell is a unique shade of aqua as seen in the designs of Ground Zero, O'2nd, and Kung Katherine.

Iced Coffee mimics the beverage’s hue and is this spring’s color for designers Noon by Noor and Daniel Silverstain.

Peach Echo is a pinkish-orange hue and can be seen in the designs of Christian Siriano, Rebecca Minkoff, Dennis Basso, and Ella Moss.

Buttercup is the rich color of buttery hue favored by designers Charles & Ron and David Hart's.

Green Flash uses the color of green in an urban setting as showcased in the spring collection of Angel Sanchez and Nicole Miller.

Rose Quartz is baby pink as seen in the designs Tosia, Houghton, M.Patmos, and Charles Youssef.

According to Pantone “Colors this season transcend cultural and gender norms. Vivid brights give way to excitement and optimism, though quiet stability prevails in this season’s palette.

It is interesting to note that the colors of spring 2016 are deemed genderless, so you can use them for both men and women.  According to Pantone, they are chosen because they denote playfulness, relaxation or reflection, things we look forward to in the next months to come.

You see, color is very important in expressing the mood of the time. The colors of the 1960’s like Hot Pink and Grass green reflected the emerging youth culture and counterculture of the era. The earthy colors Avocado and Burnt Sienna emerged during the 1970’s as we become aware of the environmental issues facing our planet. And vibrant hues like Ribbon Red dominated the 1980’s which witnessed the emergence of MTV and the economic upturn.

Which is your favorite of Spring 2016?  I'm a bit partial to Limpet Shell because it is very similar to the blue we use on the So Sew Easy site.

Bookmark the permalink.
« Spring Sale at Craftsy – Hurry for 50% off on their top classes
Don’t Miss Out »