We do not know exactly when and where quilting originated but there is no doubt that it was used as a garment, decoration, and furnishing in many parts of the world many ages ago.  From the carved ivory figure of a Pharaoh of the Egyptian First Dynasty to a quilted floor covering in Mongolia and quilted garments of the European knights- quilt making is an art that has been passed on for many generations.

In the United States of America, the first reference to quilts goes back to the 17th century and the earliest surviving American quilt is the Saltonstall quilt that dates back to 1704. Quilt making flourished in the 1800’s as European colonists came to the country finding a home in the Great Plains, where quilts were sewn for bed, door and window covers, floor mats and sometimes used as currency. The Quilting Bee later started in the area where women gathered together to socialize and work on quilt tops. Similar activities were also happening in other parts of the world and the tradition of quilt making continued.

In the mid-1950’s, a handful of pioneering artists started experimenting with modern designs for contemporary quilt making. One of the most notable is Jean Ray Laury, an academically trained artist, and designer, who created new designs based on her own experiences, environs, and thoughts. Considered as the mother of the art quilt, Laury created a full-sized quilt in 1956 for her master's of art degree project at Stanford University. It received rave reviews at the State Exposition in 1958 where it was hailed as a fresh and innovative approach to quilt making. Through the 1960’s, her work was published by Women’s Day, Better Homes and Gardens, Family Circle magazines and she was commissioned to create quilts for banks and offices. She later exhibited at the M.H. DeYoung Museum, the Fresno Art Museum, and the Museum of Contemporary Crafts in New York where her art was warmly received.

She also published a number of books which included the Appliqué Stitchery, The Art of Quilt and Her Quilts and Coverlets: A Contemporary Approach, where she challenged the public to do away with the apparent separation between fine art and functional craft and urged them to consider all types of needlework as creative media. The art quilt movement dubbed as the California Art Quilt Revolution was then underway.

In the period between 1966 and 1986 in California, more middle-class white women, with university art training, began making art quilts. They utilized the heritage of quilt and art history by blending quilt making techniques and historic cultural associations with the principles of contemporary art. By creating their original designs through the old and the new, they developed quilt making techniques in expressing their creativity. For the first time, quilts were not anymore exclusively created as functional items for home and domestic use but were also considered as aesthetic art objects.

Linda MacDonald, Yvonne Porcella, Joan Schulze, Jean Hewes, Miriam Nathan-Roberts, Therese May, Ellen Oppenheimer, Judith Content and Jean Laury were the quilt makers behind the California Quilt Revolution. They were inspired by Duchamp, Rauschenberg, Warhol and others, artists who encouraged the re-assessment of what could be considered art by expanding other types of objects that could be used in creating art. Quilt making went through a transformation from a humble bedcover into an art form. These postmodern artists paved the way for quilts to be hung in art museums in the late 1960’s and early 1970’s and this practice continues until today as new artists choose quilt making to express their creativity.

Joan Schulze, Pacita Abad, and Faith Ringgold are three contemporary quilt artists that have gained international prominence. Schulze’s experimental and ground-breaking work in the quilt medium is exhibited internationally, and are included in the collections of the Museum of Arts & Design, the National Museum of American Art’s Renwick Gallery, the John M. Walsh Collection of Contemporary Art Quilts, and other collections in the United States, Europe, and Japan.

The paintings of Filipina artist Pacita Abad combine expressive painting with trapunto which is a technique that involves quilting and sewing pieces of patterned fabrics. She is famous for her mixed media works entitled, “How Mali Lost Her Accent” and “I Thought the Streets Were Paved with Gold”.

Faith Ringgold is known for her painted story quilts. This is a kind of art that combines painting and quilted fabric with storytelling. She exhibits in various museums all over the world and has written and illustrated a number children's book where she combines the Afro-American tradition of quilt-making and European art.

From the traditional to its new form, quilt making is here to stay.  And as more artists use the modern and traditional quilting techniques to paint their experiences, imagery, and ideas- it will continue to evolve and grow as an art form.

For anyone interested in trying their hand at quilting for the first time, here's an easy contemporary quilt project with a detailed instructional video: 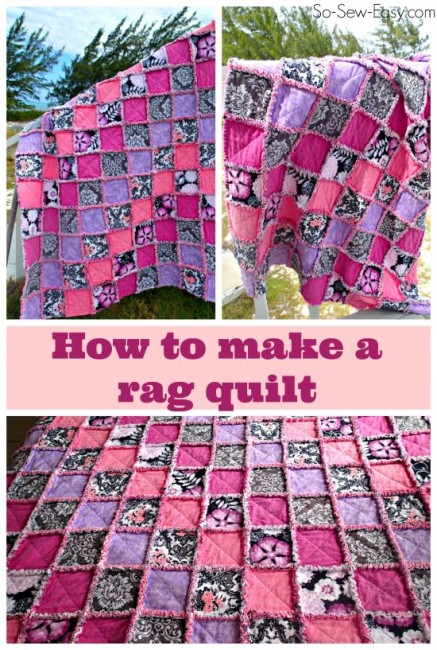 How to make a rag quilt

6 Responses to Contemporary Quilt Makers Who Paint With Fabric