The Amazing Denim Fabric Story – Through the Years 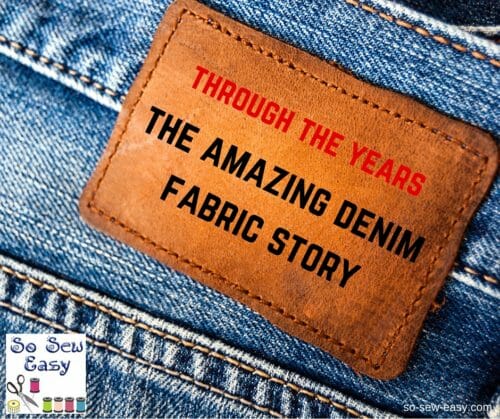 If I am allowed to look inside your wardrobe, I am almost sure that you have some garments made from denim fabric neatly folded inside. And if you had the chance to read our previous article about sewing denim, you should know that the word is actually derived from the French phrase “serge de Nimes”, which literally means serge fabric made in Nimes, France –where it was originally produced.

Versatile and sturdy, denim fabric is a cotton twill textile characterized by a weft passing under two or more warp fibers, producing a diagonal ribbing on the reverse side of the fabric. Woven by using different colors for the warp and weft threads, denim fabric is characterized by having different colors on its surfaces. The best example for this is the indigo denim where the warp thread is dyed blue and the weft thread is white. This produces a textile that is colored blue on one side and white on the other side. This results in fading characteristics that are the signature look of blue jean made from denim fabric. 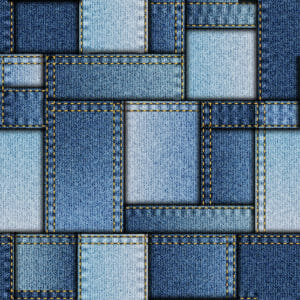 Our romance with the denim fabric started in the 1800’s when gold miners in America wanted durable working clothes that did not tear up very fast, and the Levi Strauss jeans brand was born on May 20, 1873.  In another previous post, we highlighted the Levi Strauss story as one of the most famous historical examples of selling what you sew.  Denim fabric has gone a long way since then. Popularized by Hollywood cowboy movies in the 1930’s, denim fabric seemed to find a way into most people’s closets. And after the Second World War, when the world economy was starting to recover, Lee and Wrangler competed with Levi’s for a share of the growing market for denim jeans.

It was in 1936 when Levi Strauss added the red flag to the back pocket of the denim jeans which made it the first clothing with an outside label as a form of branding. Vogue magazine soon featured the denim jeans on its cover introducing the idea that this item is not just reserved for working men but could be worn fashionably by all. 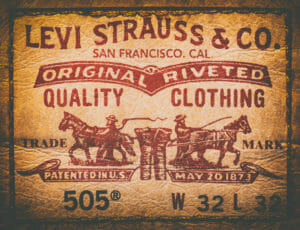 At the start of the hippie years in 1950’s when young people launched a social revolution, denim jeans as every day wear reached new heights. Considered as the defiant fashion clothing, jeans were made even more popular by culture icons James Dean and Marlon Brando. In reaction to this growing demand, denim jean manufacturers like Levi’s, Wrangler and Lee Cooper came up with different styles like cuffed jeans, light washes, black denim, painted denim and embroidered denim jeans. This was the time when the fashion rage was to personalize the jeans by adding rhinestones and patches to its design. Hip huggers, flare jeans and denim skirts also surfaced in the 1970’s. 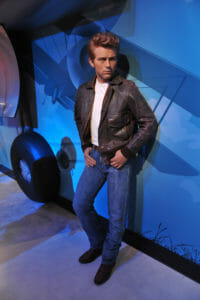 When fashion designers like Gucci, Calvin Klein, Gloria Vanderbilt and Jordache created their own signature jeans in the 1980’s, the denim began to be classified as high fashion clothing. This resulted in an increase in sales since owning a pair of designer jeans became a status symbol. Acid wash, ripped jeans and super skinny jeans became popular at this time. Denim jackets also made its debut and finally, humble denim fabric took the fashion industry by storm. 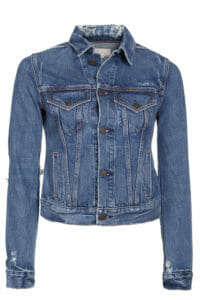 The Decline and Resurgence of Denim Fabric

The 1990’s saw a decline in popularity of the denim jeans but this did not stop the development of the denim overalls and shortalls, Carpenter jeans, head to toe denims as well as the saggy and baggy denim jeans that made up the hip hop look. A decade later, pop stars Britney Spears and Christina Aguilera made the ultra-low rise denim jeans a fashion trend once again. Flare and boot cut denim in various washes also made their appearance and by the mid-2000’s, the skinny and ripped denim jeans had staged a comeback. 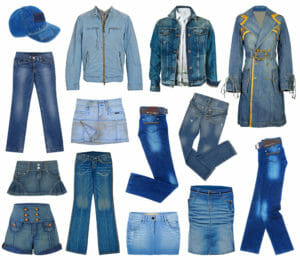 Conclusion: The State of the Denim Fabric Today

Today, Boyfriend jeans, high-waist and wide leg denim are in fashion. Denim brands like 7 for all Mankind, Citizens of Humanity and Hudson Jeans also became household names. The denim fabric stays in vogue and now comes in many different finishes, and various shapes, cuts, shapes and styles. Some people also prefer aged and authentic vintage jeans, which can be found in secondhand markets and non-conventional jeans stores. It can also be seen in the collection of famous designers like Dior and Chanel and brands like Diesel, True Religion, Rock & Republic and many others. The denim fabric is also being popularly used for skirts, dresses, polo shirts, shorts and caps so that for sewists like us, working with it can be both a challenging and fulfilling experience. And I dare say that the denim fabric is here to stay!

So if you are planning to use the good old reliable denim fabric in your next sewing project, you might want to check out our article, Tips For Sewing Denim. This is certainly a fabric that has a long and amazing history.

3 Responses to The Amazing Denim Fabric Story – Through the Years