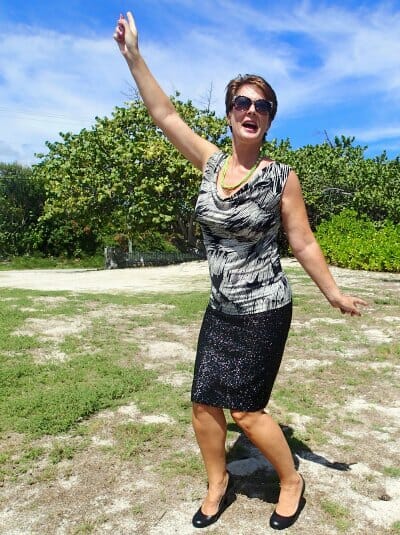 Hubby came bundling in like a whirlwind like he usually does after work, dropping things everywhere.  As he crashed about and made his way to the shower he shouted out “How soon can you be ready to go out?”

Er, what?  Where?  And who with?  Turns out the team at work had decided on an impromptu party night and were going into town to the monthly 80's night for drinks and retro dancing.  And the bus was coming in an hour! 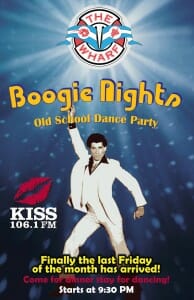 Darn – you know the feeling of instant panic – I don't have ANYTHING to wear!  At least not for an unplanned 80's disco dancing night.  I fluttered through my wardrobe.  No, nothing would do. 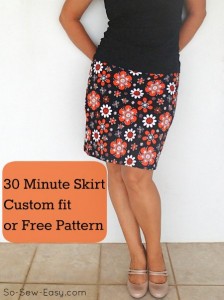 The 30 minute skirt pattern came to the rescue.  Could I really make something and still be ready to go out in an hour?  My fabric stash came to the rescue too.  Have you ever shopped at Fabric Mart?  They are one of the long-standing sponsors of the So Sew Easy site and have an ongoing advert in my sidebar over on the right.  They are also one of my favorite places to shop online.  Lots of reasons:

In a recent order I had a nice bonus.  They had an offer that if you spent over a certain amount they would send you for free a bundle of mystery fabric.  They do this offer from time to time I suppose when they want to clear out the small fabric remnants.  Sometimes you get a big bag of smaller pieces of just under a yard, but sometimes much bigger pieces. I've had a very nice piece of ponte knit 2 and 3/4 yards for free in one of these bundles,as well as lots of other variety which gives me the chance to try out new fabrics without spending any money.

In my latest free bundle I had what I can only describe as a mystery piece of fabric.  I have no idea what it is!  I suppose you could call it a ‘novelty knit'.  It has a regular knit fabric on the back but the outside is sort of well, plastic!  The whole thing is jet black but because its so shiny black, it appears to be silver and glittery and shines as you move.

It was just perfect for a 80's disco skirt.  In fact, back in the 80's I probably had one similar (although in a much smaller size!)

So I quickly pulled out my pattern, traced my measurements out on the fabric, cut it, sewed it, added some elastic and it was all done in less than 15 minutes.  I didn't even need a hem. A brand new disco skirt and the total cost – absolutely free.  Priceless! 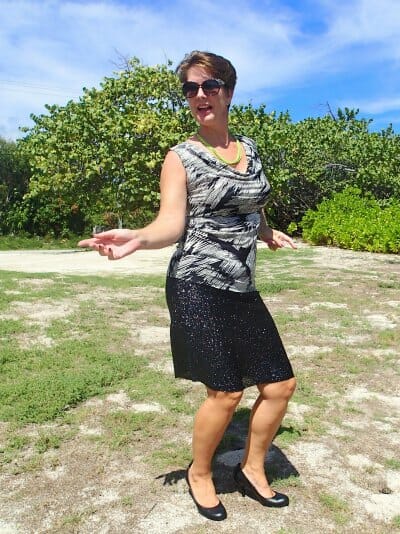 I teamed it with my Cowl Neck Top which also has a glittery sequin finish to it and I was transported back to the 80's and ready to dance the night away.  I'm thinking it's also great for the festive season and the Christmas parties where I look forward to dancing the night away under the stars.

And mysteriously, I was still ready to go out before my husband!

What's the quickest ‘item of clothing you've ever sewn?  Or what have you made in a ‘clothing emergency' when you simply had nothing to wear? 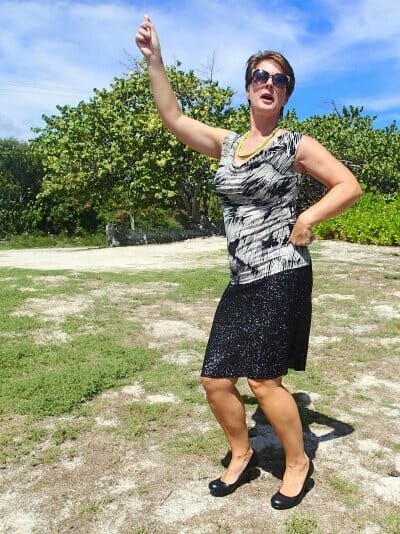 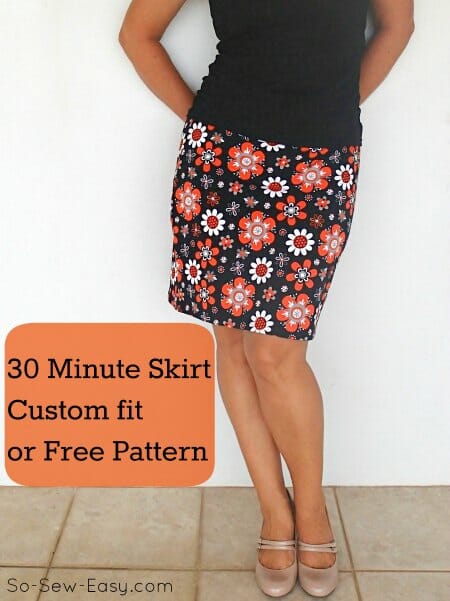 You can download the pattern from my design account on Payhip.  Add it to your cart and check out - its FREE.  The pattern will be saved in your Pattern Library safely until you are ready to sew, then you can download and print it at any time.  The ready-made pattern covers hip sizes 34 to 50 inches.
Enjoy!

Awesome. I’ve never done that sort of project, I don’t think it would suit me, but I do like this style on others.

Wow. Great job on your skirt. I’ve never sewn anything for myself quickly but I have for the kids.

I always look forward to my Sunday morning emails from you. They make me smile!

The fastest thing I ever made for an evening out was from your clutch contest. I needed one quick and then entered it.

Yes I remember that – the Make it Yours Clutch. That’s a quick sew because the bag is all one piece I think.

Deby, I love your disco poses! I hope you had a ton of fun at the dance!

LOL. That was a fun story to read. Well I have never made anything so fast my projects even it being a simple top is going to take me at least 2 days. I like slow sewing..

I prefer slow sewing myself. Pick it up, sew a little, make coffee, sew a little more. I’m less likely to make mistakes if I’m not rushing.

HAHAHA Deby I love your pictures! <3

Fabulous! The skirt and you look great! I’m so jealous of how sunny and warm it looks! Gray and cold here. 🙁

If someone wants something fast from me, they are Sooo out of luck! Myself included, I’m very slow at sewing (and knit picking which I end up doing on every project)

Deby at So Sew Easy
Author
Member
Reply to  Monica B

It was going to be dark, no one would see a slightly wonky seam in a knit anyway, but it saved time by not having to add a hem. But usually I find I have too many projects on the go and many never get the last step, like the button, completed before I am drawn onto the next one.

Heather @ What Does She Do All Day?

I’ve never had a clothing emergency myself, but my daughter did. I bought tickets to Disney on Ice at the last minute and she didn’t have a princess dress to wear! I whipped up a Minnie Mouse dress and headband with ears and bow the morning of the event.