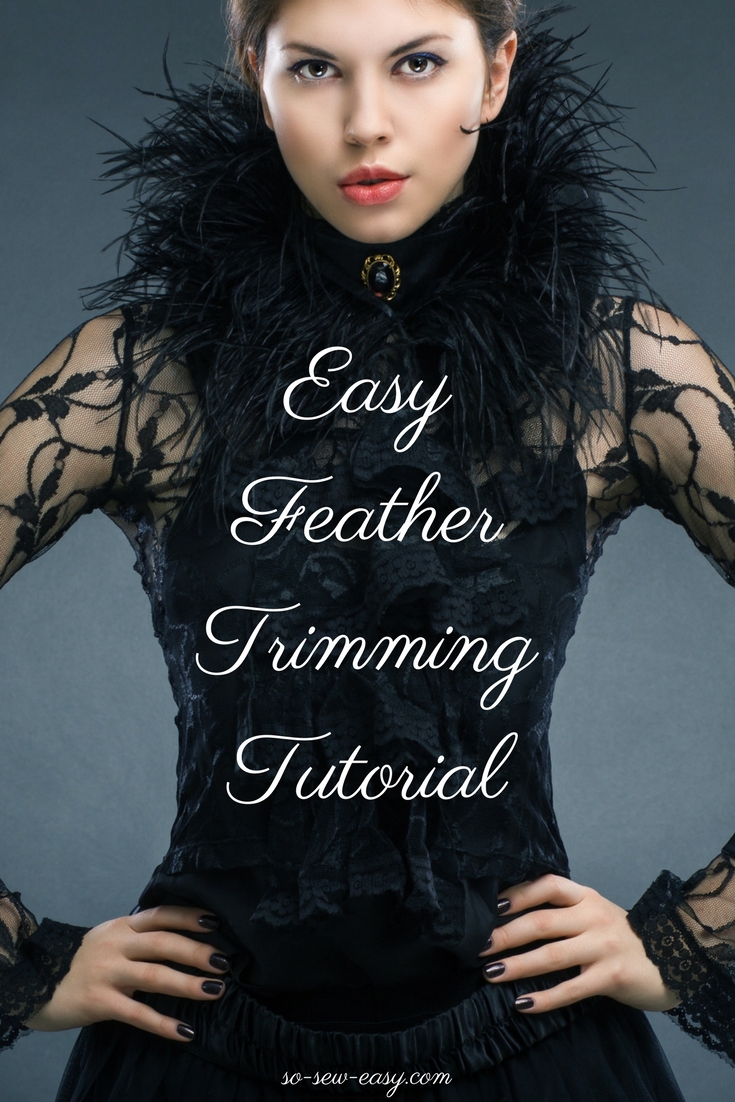 This is an easy feather trimming tutorial especially for those who live near a farm..  You may not have known, but you can use feathers as tasteful clothing embellishments that do not require constant washing.  Feathers can embellish everything from hats to gorgeous frocks and everything in between.  Feathers are an easy way to give a touch of elegance and softness for things like shoes, tutus, and handbags while you can also create a hard edge and darkness in costumes.  A popular way to use feather trimming is with a detachable collar as you'll see in the gallery below.  Whatever your motivation for using feathers, the trick is knowing how to use them.  This is what I'll try to show you in this tutorial.

First, some examples of feather trimming

Here are just a few of the ways you can use feathers in your fashion. 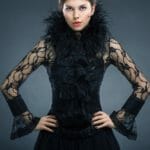 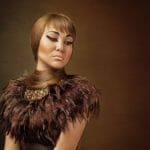 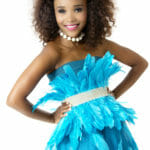 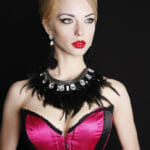 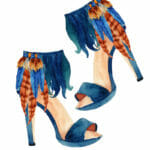 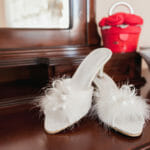 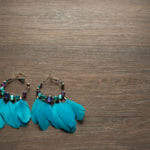 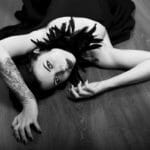 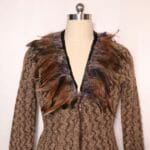 A bit of history:

Feathers have been used since prehistoric caveman times as decorations as found in the Grotto de Fumane in Italy.  Feathers have been used for tribal identification most notably the Aztec, Mayan, and Incas.  Feathers also indicated rank among Native American Indians.  In Europe, the use of rare bird feathers on a head-dress was reserved for the ruling class.  In the Pacific region, the use of feathers in cloaks denoted the status of the wearer and were used as ceremonial attire.

In my research on feathers, I also discovered that the word feather is related to the Latin word penna what we today we know it as pen.  Throughout history feathers have been used as writing implements too.  Among famous writings using a feather pen:  The Hebrew writings of the Dead Sea Scrolls and later on, the writings of the Bishop of Isidore, in Seville, Spain around the 7th century.  The feather pen was used in the writing of the Carta Magna in 1215 in England.  Finally in the Americas on the Declaration of Independence of the United States of America all written with a feather.

Feathers in hats and used as embellishments and trimmings on massed produced fashion became prominent with the styles of the flapper girls in the 20's and continues to this day. 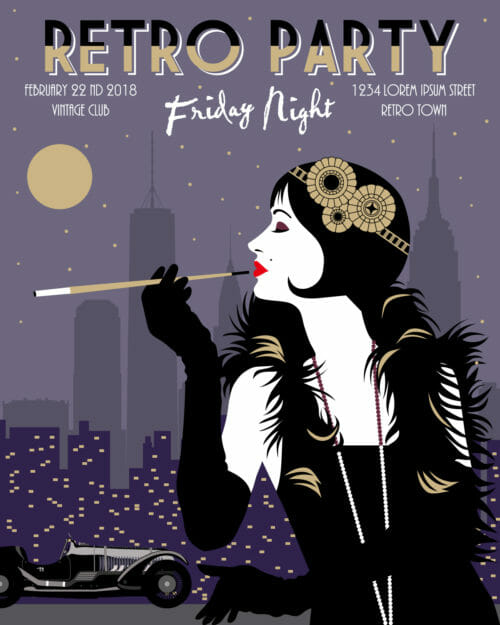 How to make the most of this easy feather trimming tutorial:

As in any other tutorial, the most important thing is to gather all your supplies.  The first glue I used dried in a few places leaving some white marks  This would be fine if you are thinking of adding some other embellishment on top of the tape such as stones or crystals.  If not, E6000 glue dries transparent and will not leave any marks.  This glue needs to be worked fairly fast so it is better to use a disposable plate and work no more than 12 inches at a time.

For my project, I am going to use feather trimming to make a removable collar/necklace.  You can use the same technique to create lots of different embellishments but I just want to show you one of the many things you can do.

The feathers I am using came from this chicken…. 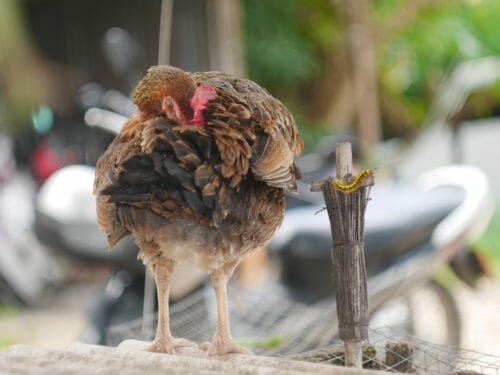 Step One:  Classify your feathers

Whether you get your feathers from a chicken farm or a ready-made boa, you first need to classify the feathers by size. 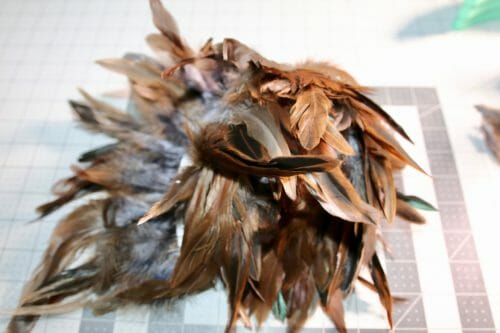 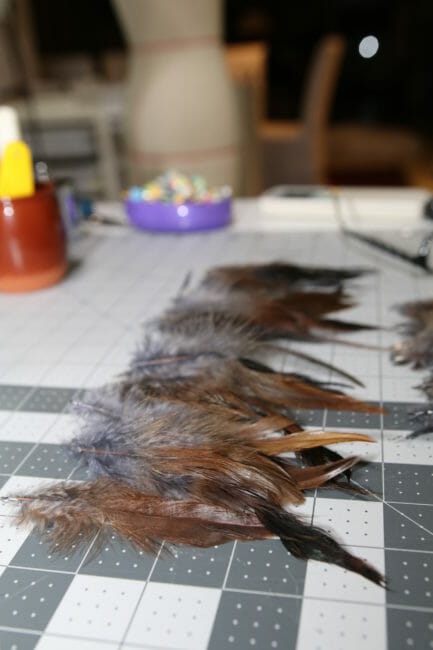 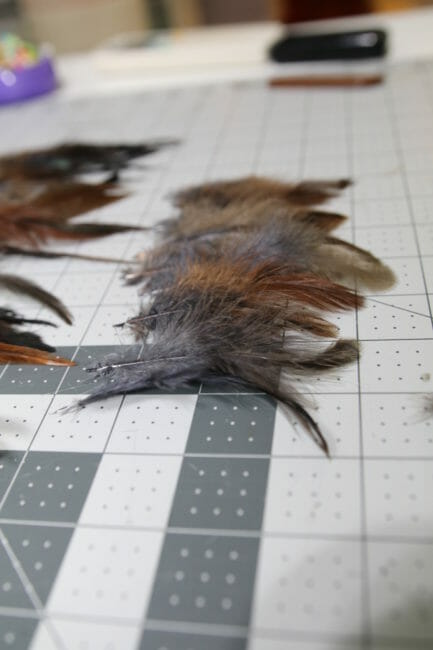 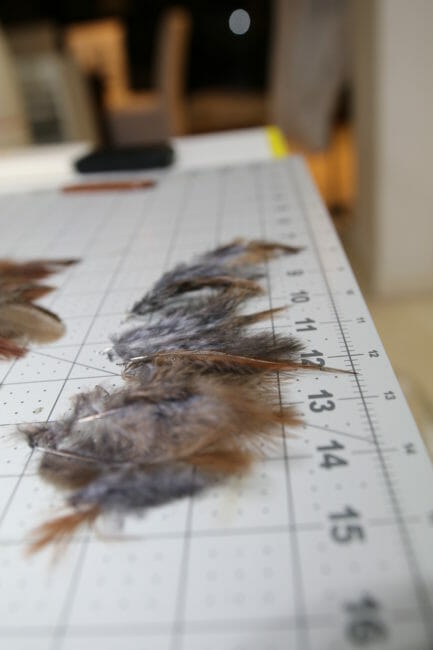 If you are mixing different colors of feathers make groups according to the colors and sizes you are using.

Lay the large feathers first on your work area. Play around with the composition of the large feathers and when you are happy with it leave it on the table.  The idea is to balance the dark feathers with the lighter color ones.  It's really up to you though.  This is where you can practice your art and come up with some really creative compositions. 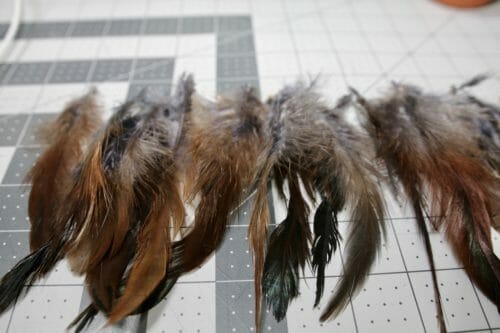 Do the same with the medium sized feathers.  This is a close-up picture. 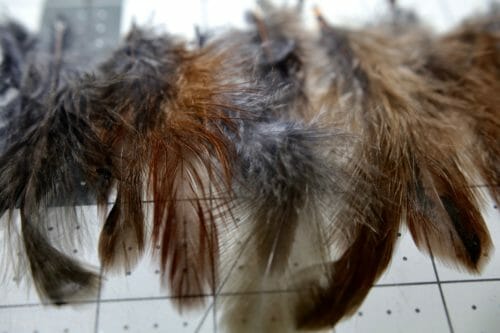 and these are the smaller ones. 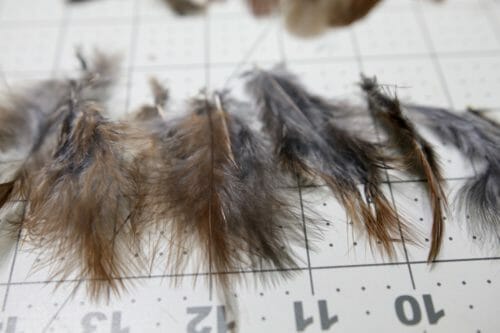 I am using a white glue and some of the glue will not likely dry completely transparent.  Use E6000 glue is you want to make sure the glue dries transparently. 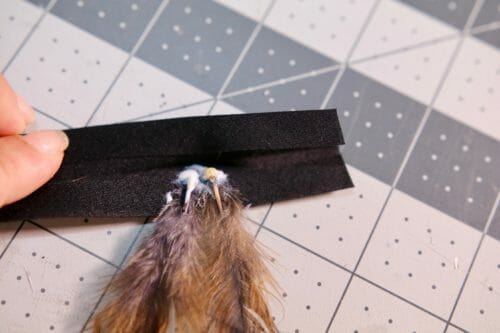 Glue the medium feathers where the gaps of the larger feathers are. 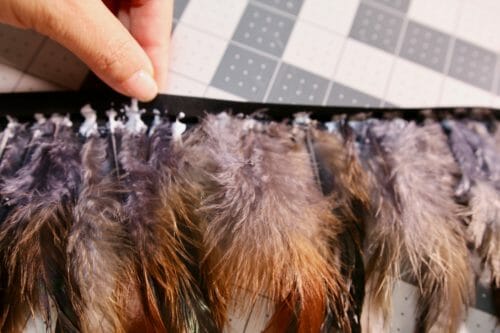 Finally, glue the down feathers filling any gaps.  Fold the tape back on and leave to glue to dry at least four hours.

Step Three: sew your feathers to the tape

Sew a first row 1/8″ from the edge near the feather side. 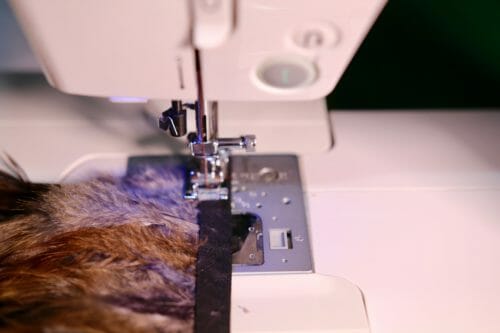 Sew the second row 1/8″ from the folded edge. 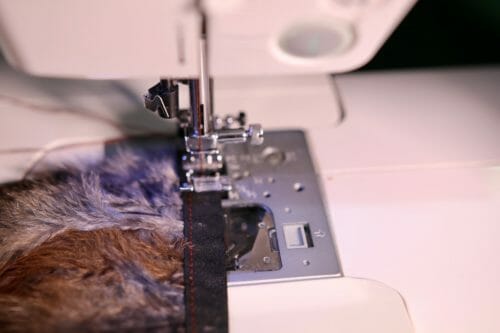 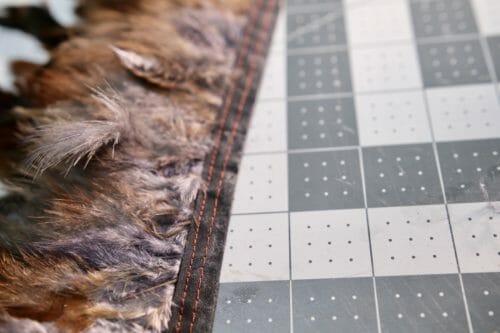 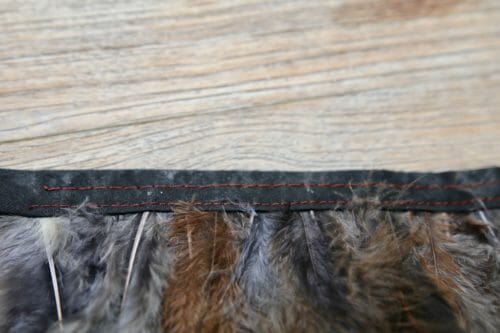 You then need to sew a bias tape over the top to make it all nice and neat.  We've done many tutorials on sewing bias tape so I won't go into that in detail.  I'm using black satin bias tape to cover over the tape where I've attached the feathers.

If you need to make your own continuous bias tape, please follow this tutorial.

In any case, I like how this easy feather trimming project came out.  Here's my detachable feather trim collar that I'm showing with a sweater. 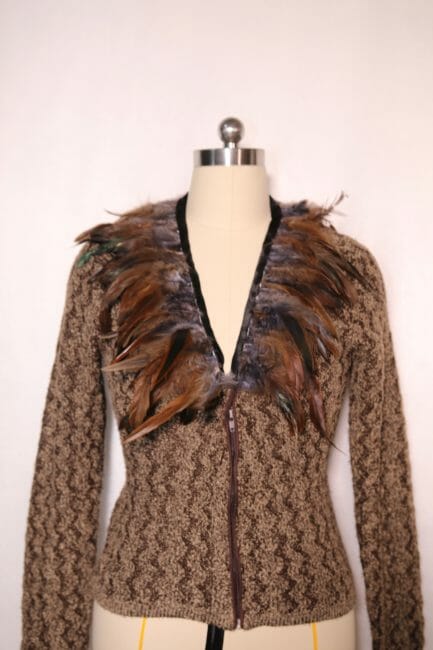 What are your thoughts on feather trimming?  Is this something you might use on a future project?  Please let me have your thoughts in the comments below.

Serendipity rules! I don’t live near a farm, but I have birds — parrots! And I’ve collected the most beautiful of their feathers for years, so I have quite a collection. I’ve been asked to do a banner regarding the Holy Spirit for my husband’s church and have wanted to use the feathers I’ve collected but have I done the research to be able to start thinking seriously about this? No, of course not! So you’ve plopped a beginning right in my lap. The feathers I will use will mostly be smaller than those used for the ‘boa’ — from cockatiels and budgies, mostly. I think a very narrow bias tape and a very fine back cloth to sew them to and . . . . Did you know that during Victorian times feathers were used for all kinds of decorative things from fireplace covers to lampshades to I forget what all else. But none of those is lightweight and mobile as a banner. This may do the trick. If I succeed I’ll post a picture . . . . no breath holding though! Thank you so very much!

You are welcome Rede, and no I did not know feathers were used for something other than a fashion decoration. Good luck with your project, and yes do post a picture would love to see it.

Ok, as one who has chickens or as some call it, yard birds, I would like to know if the feathers were cleaned and sanitized? Chickens do get mites and they can spread to people if you hang around them enough or if they have not been treated.
Just wondering as I would like to make my great granddaughter a headpiece using curled feathers.
Also, do you know how someone could dye feathers?
Cochins and Top Hat bantam chickens have beautiful feathers.

Hi, Kathy, yes the feathers must be clean with boiling water. I have concentrated on the sewing part only. Regarding dying the feathers, it is possible and I have not done it. I will experiment with a few things and follow up on this article. Let you know my findings. Better still if anyone here has succeeded in dying feathers, please do share.

How do you attach it to the sweater to make it detatchable?

HI, Susannah, I sew snaps on small hook and eye.

Use foldover elastic and zigzag stitch to attach to stretch fabric, costumes.

Great article, I posted this on my fb biz page along with your direct link, for those who sew. 🙂 Thank you!

Totally in love with it!

Great tutorial..i will us this one….i have always wanted to know how to make a skirt covered in feathers. ..would i be able to do a tutorial on this?

Hi Vikki, I’m OK if you use the concept. Would be great if you link back to us. Please enjoy and happy sewing!

To make a skirt with feathers could be done with many rows of the same method shown in this tutorial. Start by adding rows at the bottom, spacing the next one above it, parallel to the last. That having been said, a feather-covered skirt would be very impractical. The feathers on the back would never stand up to being sat upon. That’s why feathers are used on ceremonial capes that are only worn while standing, on hats, removable collars and such. You can easily mimic the look of a feathered skirt though with some of the new fake furs that cleverly mimic them.

It sews like regular fabric for a fantastic look. You just pull the strands away from seams as you sew, so the ends don’t get trapped inside. Google “fake fur feathers”.

Great tutorial. I can see multiple uses. Thank you for sharing