« Part Two:  How to Make the Christmas Tree Patchwork with Lights
Surprise! FREE Trinity 3-in-1 Bag Pattern (RRP$6.95) Today Only »

If you had told me back in February that I would be writing this post in a hotel room in Segovia, Spain, I would have said “No Way! But do tell, I like to hear a good story…”  Yet here I am.

I have come to help my daughter settle, she will be doing her university studies here in Spain.  It took her a while to decide what she wanted to do, and when she did she quietly applied to the university by herself.  Only when the acceptance came through did she come forward and share with us her plan.  The idea of studying in Spain came forth with no warning, so I simply had to jump on the plane, and here we are.

This is my first time in Segovia.  Despite being so close to Madrid, only 27 minutes ride on the high-speed train or 1 1/2 hours by car — I have fallen in love with this beautiful Medieval town.  Let me show you why.

A bit of Geography and History…

Because these two go together hand in hand.

Segovia sits in the middle of the country at a little more than 1000 meters (3297 ft) above sea-level.  The city is flanked by the central mountain ranges and the Eresma River.  The city is part of the region of Castile and León.  If you ever heard of Castillian Spanish, this is it.  The accent is so neutral it is poetry to my ears.

The history of Segovia is peppered in the architecture of the city.  It is thought to have started as a Celtic settlement which fell under the dominion of the Roman Empire.

The Aqueduct of Segovia

The most impressive landmark in Segovia is its aqueduct that is still standing today.  The aqueduct of Segovia was finished during emperor Trajan's reign, whose full name was Caesar Divi Nervae Filius Nerva Traianus Optimus Augustus, or Marcus Ulpius Traianus  (I could not resist sharing the little trivia with you).

Amazingly the aqueduct was in use all the way up to the mid-'90s.  Today it stands as a testament to the powerful ability of ancient Roman engineering and architecture.  It is one of the best-preserved aqueducts in Europe. 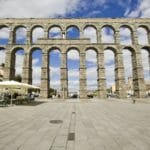 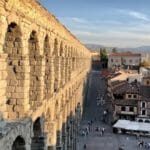 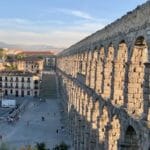 If you want to know more about this beautiful aqueduct check out this blog: https://www.ourworldforyou.com/aqueduct-segovia-spain/

The Romans ruled Segovia for 700 years until the fall of the Empire.  It is believed that the city was abandoned after the Muslim invasion of Spain.  It was then resettled after the conquest of Toledo by Alfonso VI of León and Castile.

Thought to have been built by The Knights Templars of the order of Malta, inaugurated on the 13th of September 1208.  Architecturally, it is considered to be of the late Romanesque and early Gothic peroid.

La Juderia or the Jewish Quarter

La Juderia is found behind the Cathedral and before you arrive at the Alcazar at the edge of the city wall, you know you have found it if you see the plaque above.  The Hebrew people lived in Segovia between the 12th and 15th centuries.

This Church is famous for being the place where Isabelle La Catolica was crowned queen of Castille y Leon.  At the foot of the steps of the church in the Plaza Mayor on the 13th of December, 1474.  An early Romanesque style boasts a Gothic nave an area where the church gets wider) normally two columns or walls are found) dominated by an altarpiece.  I could gaze for hours at intricate work done more than 500 years ago by the sculptor Jose Ferreras.

The Alcazar of Segovia

Alcazar which literally means Fort, started out just like that, a simple Roman fort.  It was expanded during the occupation of the Moors in Southern Europe.  When it was returned to the Christians, it served as the Royal Place for Isabel Queen of Castilla y Leon during her reign with Ferdinard II of Aragon, which famously united the Spanish Kingdoms.  It is said within these walls on April 1492 Cristopher Columbus got the approval and financial backing to set sail in August of the same year, arriving in The Bahamas on the 12th of October 1492.  This of course started the Age of Discovery that would benefit the Spanish Empire for many centuries to come.

I am not the only one who has come here for inspiration, the Alcazar of Segovia served as inspiration for a castle, a landmark in USA pop culture.  Who could it be?  If you follow me on Instagram you would know the answer since I shared it as a story.  Leave your answer in the comments section below.

Today the Alcazar hosts the oldest historical archives of the Spanish Armada and it is open for tours from 10 am to 6 pm every day with exception of Sundays.

Leti has been behind the store for 30 years, she began helping her mother 10 years ago and now she is in charge of the store.  I find her a warm and happy person.  I can't help but think that if I lived here we would become good friends.  Her love for fabric and knowledge of the subject is extensive.

Her fabrics come from Barcelona, Valencia, Milano, and the region of Cuomo in northern Italy.

This is a very little store that everyone in Segovia knows.  It is surprising the quality and array of choices given the size of this little gem.

I went to this store twice to see if I could meet the owner, sadly she was not around and I was told she was at the other outlet in Madrid.

This place is a bit larger than it looks from the street and mostly specializes in furnishing fabrics, therefore, the staff was busy attending the customers.  Due to the health protocol imposed by the government, there could be only two people inside the store which made it for a very long waiting experience.  Still, I got to browse the whole store taking a mental note of what was found.

Canvas cotton and polyester, silks, linen, damasks, wool, leather, hemp, vinyl linen every possible space of this store.  Had I had any room in my suitcase I would have bought some colored hemp that is so hard to find where I am currently living.

I have left the best for last simply because I passed this store three times before I decided to enter.  Technically not a fabric shop but a source of inspiration no less important given the history of this town with leather going back to Roman Times.

I was not sure if I would be able to meet the hands behind this magnificent little shop.  Upon entering, sparkling blue eyes and a warm personality greeted me, immediately I could sense we would be friends, and I was not wrong.

Liz Segovia (Brand name) is a team effort of Eva who handles the store, website, and social media, and her husband Paco, the artist in the leather studio who is in charge from concept to finished product.  I was given a tour of his Alibaba's cave, I was especially excited since I have never seen a functional leather studio before.  I was shocked to see that only two German machines and a set of leather tools are all it takes to make these wonderful bags.  Paco's experience goes back three decades.  It was then I remembered one of my fashion design teachers once said: “the better you are the less machine you need”.  I won't say much more about Paco and Eva, because I am editing a video about them so you can know how the magic happens. For now please check their website: https://www.lizsegovia.com/

I am hoping that Paco agrees to make a series of classes so we can all learn from his vast experience.  I would like to bring a few travelers every year to take classes with him, Eva, and I could translate…

If you like history, sitting in a cafe to sketch and watch people, chatting to shop owners that have been in the city for generations, learning or practicing your Spanish, this is the perfect place.

Inspiration is given by the sunsets, the narrow cobblestone streets with flowered balconies, the smell of coffee escaping from a window, the small caña after a long day of exploring, the medieval buildings, the echos of past eras of hardship and prosperity.  Segovia has seen much, and there is no doubt in my mind that whatever happens the strong in mind and spirit will survive protected by these ancient walls.

But for now, I am tired of walking, I don't know how many miles I've done in the past three weeks looking around exploring, helping settle my daughter in her new home, taking pictures, and looking for fabrics.  I'm very blessed to say that here I've found a wonderful town and some friends who can truly inspire.  And for that, I am deeply grateful.

I have found that people who work in the fabric industry complain about the same things all over the world.  There are fewer people sewing, the competition with online shops is fierce, and the pandemic has made a hole in the economy that is hard to recover from.  But all agree on one thing, that they just want to be left alone to continue selling their fabrics and earning an honest living.  I am hoping and wishing that they do get their wish, this is such a charming city, with enormous history, amazing architecture and full of wonderfully warm people… what can we do to help?

Together we can be stronger.

So what do you think of Segovia?  Have you been here before?  Would you like to take a sewing leather class with Paco, explore the city and its surroundings, or an Online class?  Let me know in the comments below. And Until Next Time, Happy Sewing!

If you want to help us continue to bring you a wide selection of free sewing patterns and projects, please consider buying us a coffee.  We'd really, really appreciate it.
Bookmark the permalink.
« Part Two:  How to Make the Christmas Tree Patchwork with Lights
Surprise! FREE Trinity 3-in-1 Bag Pattern (RRP$6.95) Today Only »

40 Responses to Fabric Hunting Segovia – in search of inspiration