A Super Quick History of Cotton

Today we'll take a quick dive into the very interesting history of cotton. 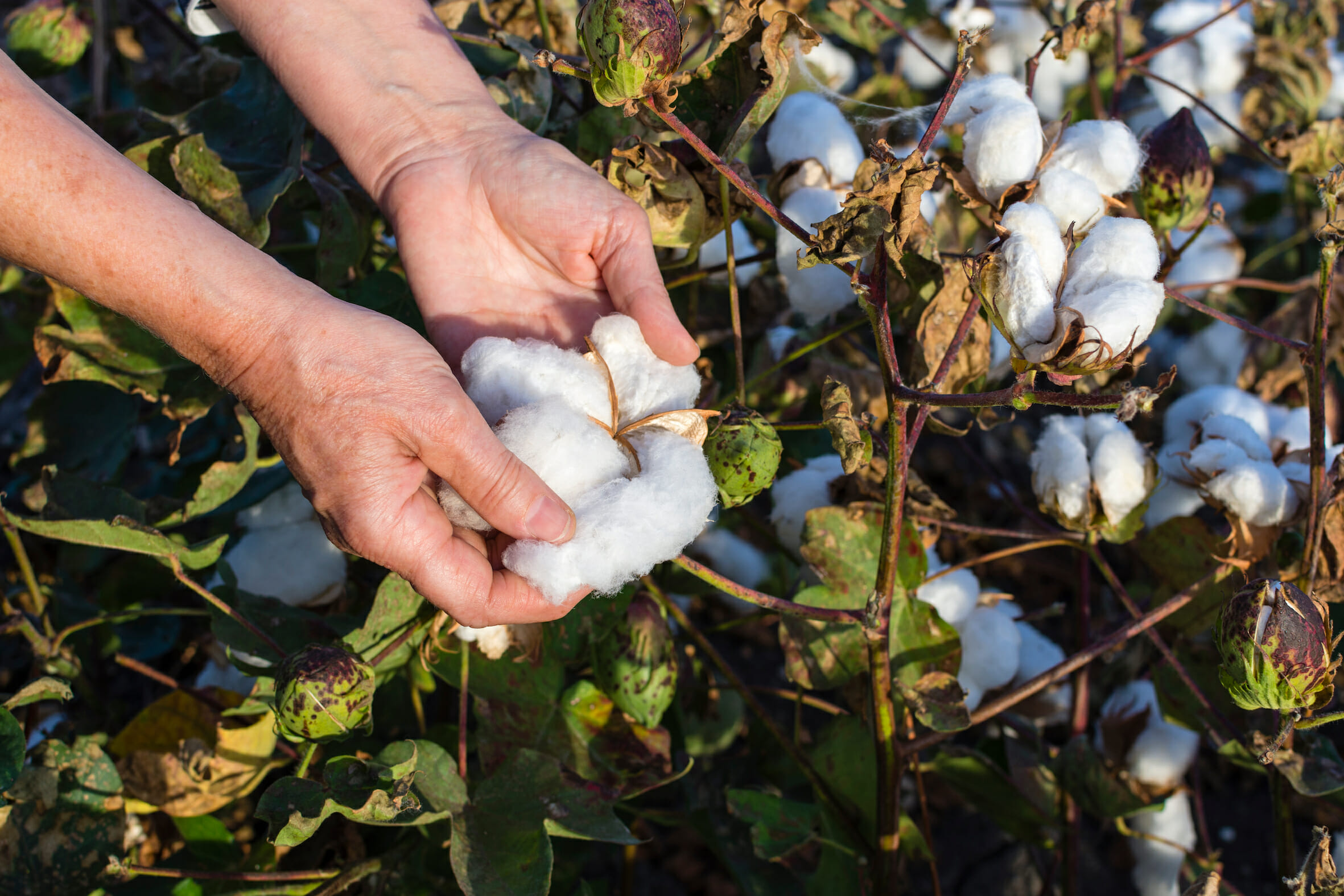 Humanity's history with cotton is extremely old, some of the oldest estimates go back as far as 7,000 years ago!

But to the European civilizations, the widespread use of cotton is relatively new.  The plant is native to tropical and subtropical regions and can't tolerate a freezing winter.  This forced the use of wool, linen or hemp instead.

In Africa, East Asia and particularly India (and Pakistan) cotton has been widely grown and used since at least 1500 BC (and perhaps as old as 4000 BC).  Interestingly cotton fabrics and evidence of domestication have been discovered all the way in Mexico dating to a similar time around 5000 to 3000 BC.

According to the Columbia Encyclopedia:

“Cotton has been spun, woven, and dyed since prehistoric times. It clothed the people of ancient India, Egypt, and China. Hundreds of years before the Christian era, cotton textiles were woven in India with matchless skill, and their use spread to the Mediterranean countries.”

However, the West was aware of the material through trade.  Ancient and medieval peoples have exchanged many valuable goods for it.  The ancient Greek historian Herodotus mentions cotton in the 5th century BC, saying “a wool exceeding in beauty and goodness that of sheep.”

The Egyptians were known to grow and spin cotton from around 650 BC.  Egypt continued to supply Europe with cotton as a province of the Roman empire, then through trade into medieval times. Between Egypt and the Indian Mughal Empire, the upper classes of Europe received a steady stream of cotton all the way to the renaissance.

In the late medieval period imported cotton became well known to Northern Europe, funnily, without any knowledge of how it was grown (other than that is was a plant). People in the region, noting cotton's similarities to wool, could only imagine that cotton must be produced by some sort of plant-borne sheep.

A quote from John Mandeville, a supposed traveler:

“There grew there [India] a wonderful tree which bore tiny lambs on the endes of its branches. These branches were so pliable that they bent down to allow the lambs to feed when they are hungrie [sic].”

Below is the humorous depiction of the imagined plant as imagined by the author: 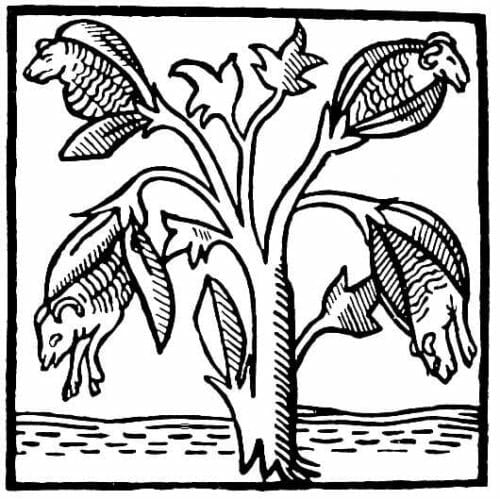 I do wish this was actually how it worked.

By the 1500s cotton was widely farmed (at large scale) throughout the warmer regions of Asia and the Americas.  They would go on to supply the rest of the world during the massive changes of the industrial revolution.

Cotton production and particularly processing changed greatly during the industrial revolution. Mechanization made the processing far cheaper and available for public consumption, and the efforts of the British Empire restructured much of the cotton-producing efforts in the colonies.

The South United States, using slave labor from Africa, and India exported the lion's share of raw, unprocessed cotton.  Export was greatly ‘encouraged' over local processing by the Empire. This was mostly done through tariffs against native manufacturers.  This both eliminated local competition for the textile industry and increased trade to British merchant fleets. 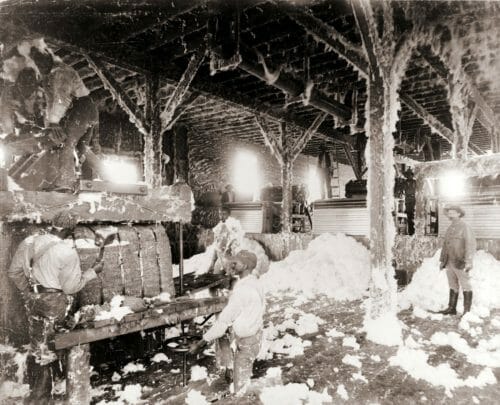 During the American civil war, Egypt became a new global hub of cotton growing, to make up for the lack of access to the cotton of the Confederate South.  When the war ended, demand returned to the US, sending Egypt into bankruptcy (this was a major factor in the future British invasion of Egypt).

Cotton production further developed in the American south.  After emancipation, sharecropping evolved, where landless white and black farmers worked land owned by others for a share of the profits. Hand-picking of cotton endured well into WWII when finally machines gentle enough to pick the delicate balls without shredding the fibers were developed.

In many developing countries hand-picking of cotton is still common, but mechanization is the standard in the majority of producers.

Like all farming, cotton farming has changed along with the development of new and better tractors, fertilizers, pesticides, and herbicides.  It remains today one of the most demanding crops to farm. Cotton is very weak to pest damage in particular and requires the largest amount of pesticide use compared to any other crop.

In the modern-day, the newest development in cotton-growing has been genetic modification. As of 2011, up to 70% of the total area planted of cotton was with GM seeds.

Genetic modification has been done to either provide resistance to RoundUp (a broad-spectrum herbicide made by Monsanto, now Bayer) and/or to grant resistance to some of the most destructive pests that plague cotton growers.  Unfortunately even GMO cotton still needs large applications of pesticides. 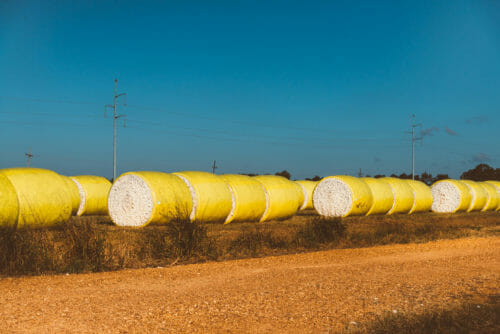 Harvested cotton ready to be collected and moved to a processing facility.

A very small number of farmers are moving toward an organic system of production.  Organic cotton is often used in baby clothes and diapers, to limit exposure to chemicals and allergens.

In the world of fashion, the use of cotton has followed the development of technology and availability.  Before the invention of the cotton gin, it took over 600 hours of human labor to produce one bale of cotton (which is about 500 pounds).  This, of course, made cotton garments far too expensive and out of reach of the average person.

We can see cotton in the wealthy classes of Europe, though not quite as desired as silk, nor as warm as wool.  Soft undergarments, undershirts, and light summer dresses were common uses.  Like most things imported then, cotton was most commonly used as a display of wealth and prestige.

In nations with native grown cotton, like India, cotton was worn up and down the social ranks. 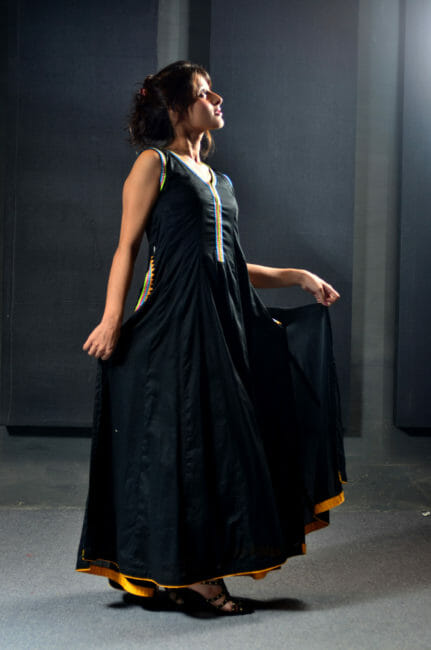 After the industrial revolution cotton became an affordable choice for the average person.  As the price continued to drop more and more people across the world began to use it.

In the warmer climates of the Americas and Asia, western made cotton garments were a common export.  Today cotton is the most popular natural fiber in the world, its lightness, inexpensiveness, and diversity of use make it available everywhere.

Cotton is used for an astounding number of textile products, it is the most used natural fiber for a reason. These uses include: denim for bluejeans, terrycloth for bath towels, cambric which is popularly used for blue work shirts (which is where we get the term ‘blue-collar'); most of your socks, underwear, bedsheets, and T-shirts are made of cotton. 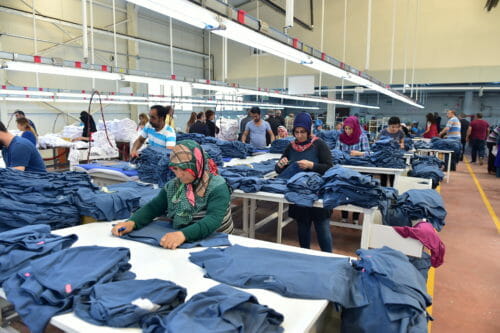 Cotton garments being made in a Turkish factory.

Cotton is of course used in a variety of other places outside the textile industry, including coffee filters, fishing nets, tents, cotton paper, medical cotton balls, to name a few.  The seed which is extracted from the fiber is used to create cottonseed oil which is used for cooking.  The seed hulls can be fed to livestock to supplement their feed.

Who Makes It Today?

Some places have become well known for their high-quality cotton.  Egyptian cotton is well known around the world for its high quality.  Many luxury garments will boast at having Egyptian cotton.  Similarly, Pima cotton, grown in the American Southwest, is highly regarded for quality and features on many luxury labels.

Be careful, the names “Egyptian Cotton” and “Pima Cotton” have become more like labels now to show a certain level of fineness.  Most so-called Egyptian or Pima cotton is not in fact from those areas.

The five leading exporters of cotton are 1) the United States, 2) India, 3) Brazil, 4) Australia, and 5) Uzbekistan. China is the leading total producer but consumes the majority of its production (a staggering 6,532,000 metric tonnes in 2014!).

The Future Of Cotton

What do you think?  How will we find new ways of using this wonderful material?  I hope you enjoyed this quick trip down the history of cotton.  See you next time, Until Then, Happy Sewing!

28 Responses to A Super Quick History of Cotton