A Brief History Of Dyeing Fabric

The Greatest Discovery In The History Of Dyeing Fabric

It’s the Easter vacation of 1856, Cable Street, east London, and a young William H. Perkin is hunched over his laboratory table. Fumes and gasses rise up from his work and struggle to filter out of the tiny windows of the sparse and cramped apartment. The primitive lab is on the top floor of the building and right above his own home.  Through the open window, the sounds of hoof steps and men's voices can easily be heard, but the enterprising chemist pays them no mind. His teacher, the well-respected August Wilhelm von Hofmann, has left for Germany, giving the ambitious Perkin precious time alone to his work.

Only a few months ago Hofmann had published his remarkable hypothesis, that the synthesis of quinine from coal tar may be possible. Whoever could do it was surely bound for success, quinine, a treatment for malaria, was extremely rare in nature, fetching a hefty price with demand from the far-flung colonies. Perkin had taken to the work with vigor, impressing his teacher. Fortunately, Hofmann trusted his young assistant enough to work on the project in his absence – the field of chemistry was only in its infancy, and an up-and-coming intelligent assistant was a blessing and a great asset.

This day, Perkin was experimenting with the substances derived from coal-tar, a noxious industrial waste produced when burning coal and coke. Being in the throws of the industrial revolution, finding some sort of use for this toxic residue was a potential gold mine.

Perkin had already completed one experiment using a component of coal tar, the toxic toluene. He’d isolated a derivative, called allyl-toluidine, then attempted to transform it into quinine by oxidizing it in a mixture of acids. This test ended in failure, leaving behind a reddish-black powder at the bottom of his test tube. Unperturbed, he continued, this time with another substance. Failure, after all, was simply another piece to the puzzle.  The more he failed, the clearer, he hoped, the picture would become.

This time he chose a simpler compound, aniline – an oily liquid again synthesized from coal tar. It had the appearance of cooking oil but unfortunately smelt strongly of rotten fish. However, his initial discomfort at the smell was quickly overtaken by his curiosity, and before long the odor was only his neighbor's problem.

Once again, he mixed the substance with the same acids, and like before the experiment failed. This time, however, a black, goo was at the bottom of the test tube. Marking that one off the list, Perkin moved to the sink and began to wash out the tube. Then he saw something very interesting.  Along the side of the glass, remained a bright purple residue. The color was extremely deep and vivid, and it clung to the glass stubbornly. Fascinated, Perkin treated his new substance with alcohol and dabbed it with a cotton cloth – the vivid purple transferred to the cloth perfectly.

William Perkin had accidentally discovered the first man-made dye, in royal purple no less. After more experiments proving the dye's merit, he filed for a patent in August 1856 at only 18 years old. Needless to say, this discovery revolutionized fabric dyeing and made Perkin a rich man – bringing bright colors to men and women the world over, at a fraction of their previous cost.

Back To The Beginning

For now, though, let's go back in time to the beginning of the history of dyeing fabric.

I would make the claim that as long as clothes have been spun they have, in some manner or another, been dyed. When ancient humans finally figured out the advantages of wool, linen, and cotton, over loincloths and furs, one of the first things they must have done was to see what kinds of interesting colors they could put on them.

We see evidence of dyed fabric going as far back as the Neolithic era, that’s roughly between 10,000 BC to 4,000 BC. Essentially, since man began turning from cave-man to sedentary human – domesticating animals, growing crops, and building civilization. That makes the subject one of the oldest in the world of fashion.

Up until the above-mentioned discovery of synthetics, all dyeing was done with natural substances. These could be derived from countless plants, rocks, insects, and animals.

Reds, browns, and oranges make up the earliest found colors, ranging across the Levant, Mesopotamia, Egypt, and Europe. Followed by blues, and yellows, with green appearing somewhat later. Where the earliest civilizations sprung out from there is evidence for dyed clothes. In China, evidence of dyeing with plants, barks, and insects has been traced back more than 5,000 years. The earliest written record in the history of dyeing fabric is from China, claiming 2600 BC.

As with all dating older than written history, exact dates are impossible to come by, carbon dating is only so accurate and can really only give us a broad idea of the time frame. However, it is widely accepted that by the late Bronze Age, and certainly the early Iron Age, dyeing was in widespread use.

Some of our most reliable histories of ancient dyeing come from the Greeks, Romans, and Egyptians. Each mention either dyed clothes or the profession of dyeing numerous times. We even have some legends featuring dyed clothes in the ancient world.

Alexander the Great mentions dyed clothes when he spoke of the “beautiful printed cottons” in India. We've discussed before the important history of cotton, and in the history of dyeing fabric, it is one of the most important fibers.

However, the ancient world held one dye above all others –Tyrian purple. So much so that to this day it continues to be known as the color of royalty.

Tyrian purple could only be produced from the milky mucosal secretions of some species of seas snails – one particular in the Eastern Mediterranean known as the Murex being the most known. The dye was beautiful beyond all others and very, very, rare – one murex only being able to produce a few drops of dye (only when freshly caught as well).

“It was a color of legendary origin, supposedly discovered by Heracles (Hercules, to the Romans). According to Greek myth, the great hero saw that his dog’s mouth was stained purple after chewing shells on the Levantine shore. Heracles considered the hue to be so magnificent that he presented a purple robe to the king of Phoenicia, who promptly declared the color to be a symbol of royalty and made Tyre the ancient world’s center of murex dye production.”

The dyers of the late Middle Ages had their own remarkable color as well, this one from the new world. From the shells of tiny kermes insects and the bark of dyewood trees native to India and Brazil, came a deep scarlet to drape the powerful Catholic cardinals of that era.

How Was Dyeing Done?

The basic formula for dyeing has changed little over time. The dye material is put into a pot of water, then the textile is added to the pot, which is then heated and stirred until the color is transferred. Many natural dyes require the use of mordants, which are chemicals that bind the dye to the textile fibers. Textile fiber may be dyed before spinning (“dyed in the wool”), but most textiles are “yarn-dyed” or “piece-dyed” after weaving. Many Mordants, and some dyes, produce strong odors, which is why we find most large-scale dyeworks alone in their own districts.

Synthetic dyes generally follow the same process, but without the same need for a mordant. Synthetic dyes can be applied to a greater variety of textiles, as natural dyes struggle to, or cannot bond to synthetic textiles. With industrialization, dyeing could occur on a much greater scale than before.

Here is an interesting list of natural dyes from Wikipedia:

The Future Of Dyes

The future history of dyeing fabric seems to be fairly clear. Synthetic dyeing will continue to be the dominant method of dyeing across the world. Colorful clothes at an affordable price will always be in demand so long as they are available. I doubt that any push centered around environmentalism will truly put a dent in the industry, in truth there really isn't a suitable alternative. There literally will never be enough mollusks or beetles to come close to satisfying the demand for vibrant colors.

However, I do think natural dyeing will continue to grow in popularity, similar to the organic movement, and be sought after by people who are less price sensitive. More and more people are coming to the conclusion that getting closer to the natural way of doing things in both healthier and cleaner.  I don't think clothing is an exception to that.

For those that don't wish to pay the high prices for commercially produced natural dyed clothes, there is another way. Home dyeing has endured as a tradition and hobby in many places around the world. Perhaps we'll even talk about it in the future…

I hope you've enjoyed this history of dyeing fabric, as usual, we can only get into so much detail in a single blog post and there is so much more that can be talked about.  Let me know in the comments below if you're interested in learning more on this topic and we'll do the best we can to oblige.

See you next time, Happy Sewing!

If you want to help us continue to bring you a wide selection of free sewing patterns, projects, and articles like this, please consider buying us a coffee to keep us going.  We'd really, really appreciate it. 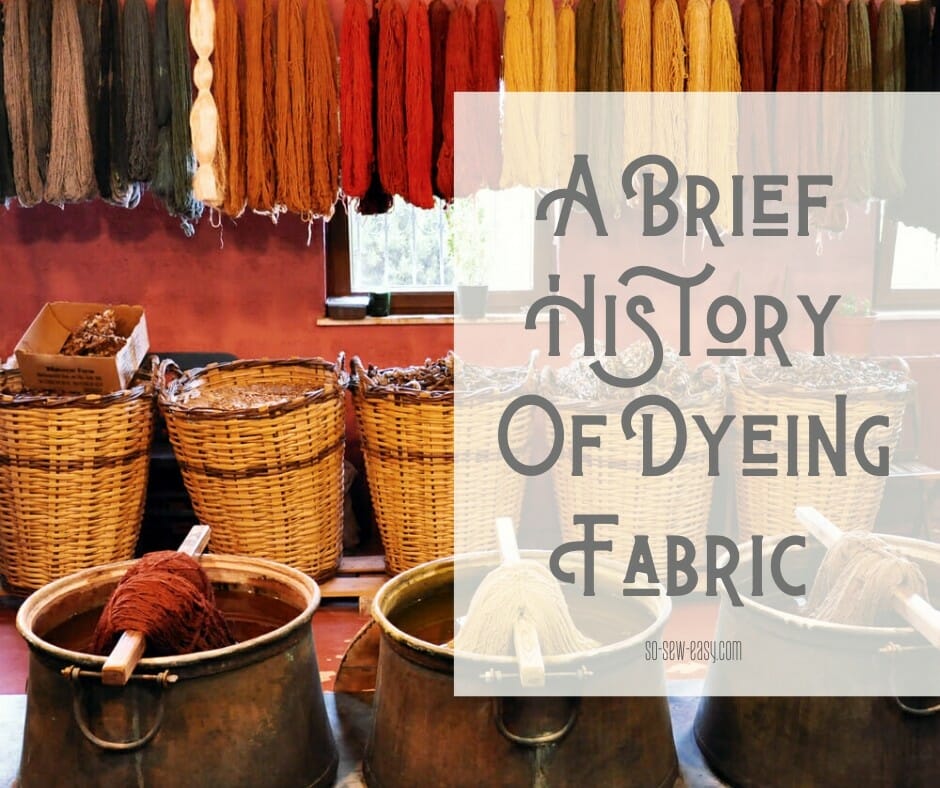 I had to do this for a class assignment.

I started to investigate dyeing fabric this Easter when I made my first attempt at dyeing eggs with natural materials like onion peels and tumeric. Then I tried with cotton fabric and it turned out great.
Thank you for this article!

HI Daniela, What did you use? how did you fix the color on cotton?

Thanks….the intro hooked me. I have an image of a young man hunkered down in his studio with his pots of steam and test tubes… I love writing that paints pictures. Thanks for an informative clip. More, please.

Enjoyed your article. I look forward to more info. Thanks!

Great article! I would love to read more about dying and its history. Thank you for all your excellent work!

Great simple history piece; if you are interested in a current picture of world fabric dyeing in the clothing industry watch “Riverblue”. It is very concerning to say the least.

Wow, what a fascinating documentary. I’ll leave a link to the trailer here for the other readers: https://www.youtube.com/watch?v=pfPMeMGbrj4

I can scarcely think of a better argument of natural dyes, eco friendly fabrics, garment recycling, and frankly, just sewing your own high quality clothes, than this video.

What a wonderful and detailed article. The story at the beginning had me on the edge of my seat. Yes, please, I’d love to learn some more about this topic. Keep up the great work.