A Super Quick History Of Linen

The flax fields are blooming in a beautiful display of blue-purple flowers.  Bees fill the air with their happy flight, children duck and dive through the waist-high stalks.  The seasons eventually change and soon the stalks will begin to ripen into a bright blonde, signaling the farmers to begin their harvest.  The clipped straw will lay there, steaming in the hot sun and soaking in the dawn dew.  When enough time has passed the villagers will gather and begin the taxing process of turning the straw into one of the world's most valuable fibers.  Time and trade will see the fruits of their labor travel across the Mediterranean Sea to lands they could have never dreamed of, their efforts are now a part of the ancient history of linen. 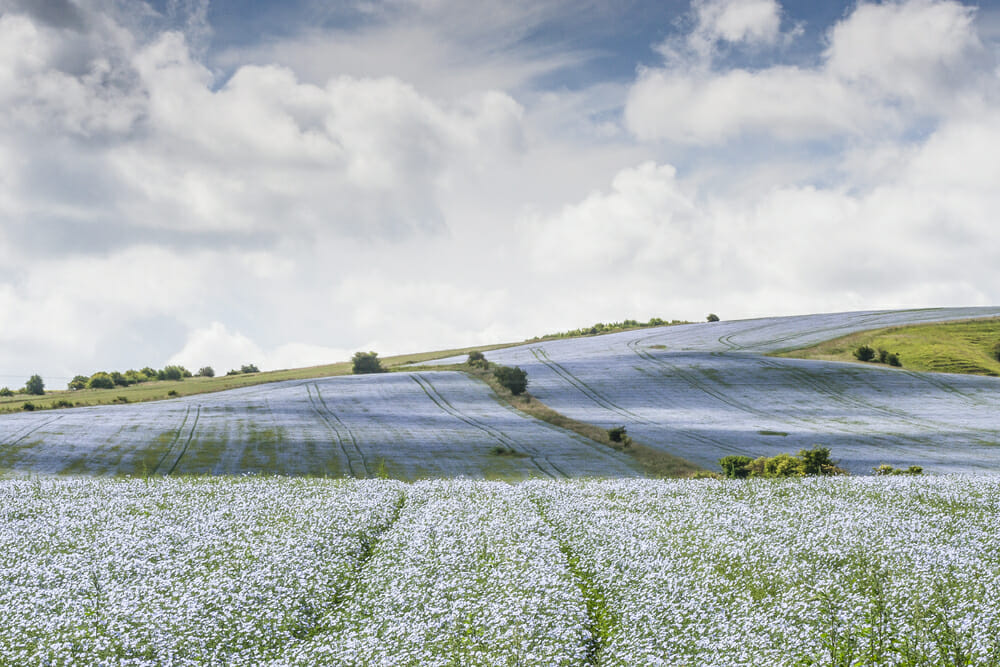 Flax in bloom should be ready to harvest in a couple of months.

Last week we dove into the exciting history of cotton.  Today we'll look at an even older textile, a textile known across the ancient world from Pharos of Egypt to the Kings of Europe and the Emperors of China. That textile is of course Linen.  Join me today to take a quick look at the history of linen.

Linen is made of the processed fibers of the flax plant.  The flax plant is suited to cooler climates and has a long history across the Old World and Asia.  The plant is both a food and fiber crop.  The oil (called linseed oil) and the flax seeds are both edible, although the oil is more often used for varnishing wood or in paints.

Linen is a very strong and hardy fabric.  In fact, it is one of the few fabrics that is stronger when wet than dry. The fibers are not flexible and do not stretch.  However, because linen fibers have very low elasticity, the fabric eventually breaks if it is folded and ironed at the same place repeatedly over time.

The plant grows up to four feet tall and has beautiful blue-purple flowers.

The Ancient History Of Linen

The history of linen goes so far back that our very language has been shaped by this remarkable textile.  The word comes from the Latin word for the flax plant; linum, and the earlier Greek λίνον (linon).  This word has given birth to a number of other terms:

The oldest evidence of Linen production may go as far back as an amazing 36,000 years ago!  This was an impressive discovery of a prehistoric cave in Georgia that contained dyed wild flax fibers, suggesting the crafting of dyed linen fabrics.  Imagine that, even cave-people loved the cool, luxurious feel of linen. 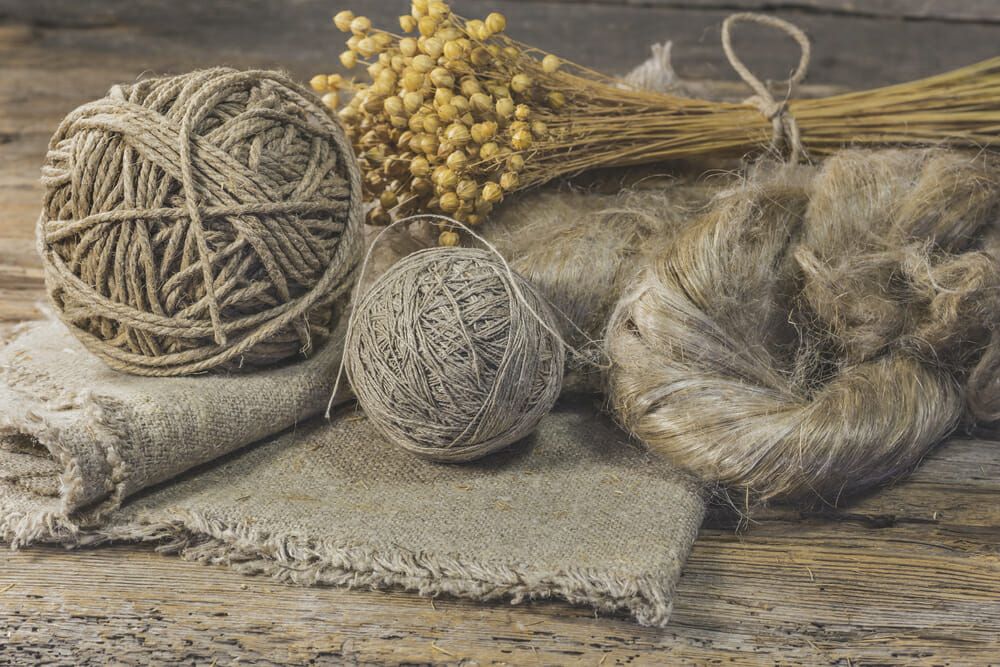 More “recent” records show evidence for flax yarn and fabric dating to about 8000 BC in a Swiss lake dwelling.  There is evidence of domesticated flax in India and China dating to about 3,000 BC, and a similar time period for Germany and further Western Europe.  Flax was first domesticated in the ancient “Fertile Crescent” region, which is a place home to some of the earliest human civilizations.  The region is primarily made up of Mesopotamia and The Levant (modern Iraq, Syria, Iran, Israel, Palestine, Jordan, Lebanon).

The ancient Egyptians used linen to wrap their dead Pharaohs.  Amazingly, after more than 3,000 years some of these wrappings have remained in perfect preservation.  Our earliest evidence of structured linen production comes from Egypt, written by the Greeks on the famous ‘Linear B Tablet‘.  It mentions the Egyptian women workers cataloged as “li-ne-ya” (λίνεια, lineia).

The ancient Greek historian Plutarch mentions Linen as being the preferred garb of the priests at the temple of Isis.  The Greeks, like the Egyptians, saw linen as a symbol of divine purity and cherished it deeply. 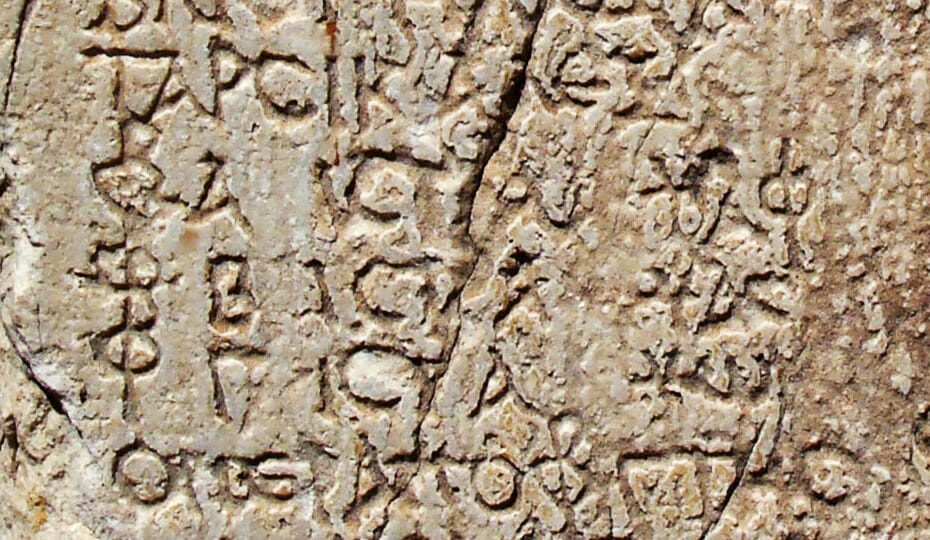 An ancient price edict by Emperor Diocletian setting the prices of three different grades of linen.

The Phoenicians (originating in Lebanon), who, with their merchant fleet, opened up new channels of commerce to the peoples of the Mediterranean, and developed the tin mines of Cornwall, introduced flax growing and the making of linen into Ireland before the birth of Christ.  Many credit their merchant fleets as one of the main reasons flax is so widespread (among other crops/crafts that originated in the Levant).  The Phoenicians traded Egyptian linen extensively throughout the Mediterranean.

The Romans were great purchasers of Egyptian linen, as well as growing substantial amounts within the Empire. Notably, they used Linen to make their sails.

When the Roman Empire fell the production of linen and flax declined rapidly.  Production only recovered by the time of Charlemagne (770 AD) who widely publicized the health benefits of linseed oil. Eventually, Flanders became the major center of the linen industry in the European Middle Ages. 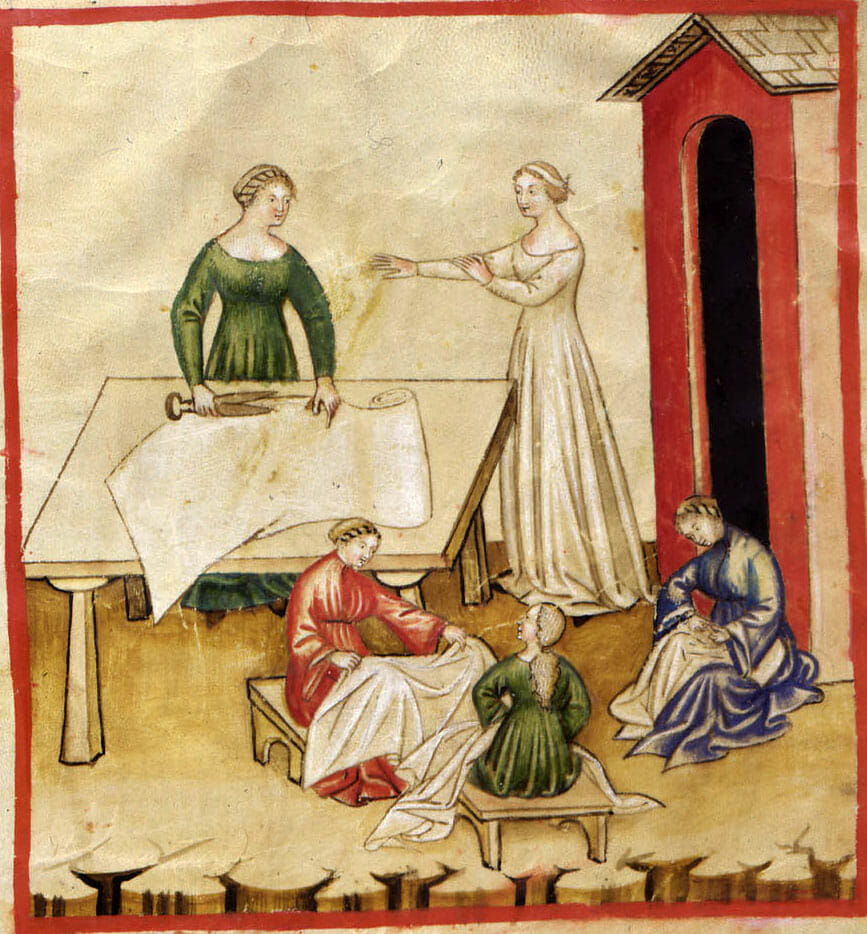 During the Victorian era, the majority of the world's linen was produced in Belfast, earning it the nickname Linenopolis.  Belfast remains one of the most famous linen producing centers throughout history.

The processing and weaving of linen greatly advanced with the industrial revolution, but to a far lesser extent than cotton.  Linen can be woven with the same machinery as cotton, but it loses its distinctive linen weave making it an unpopular choice. 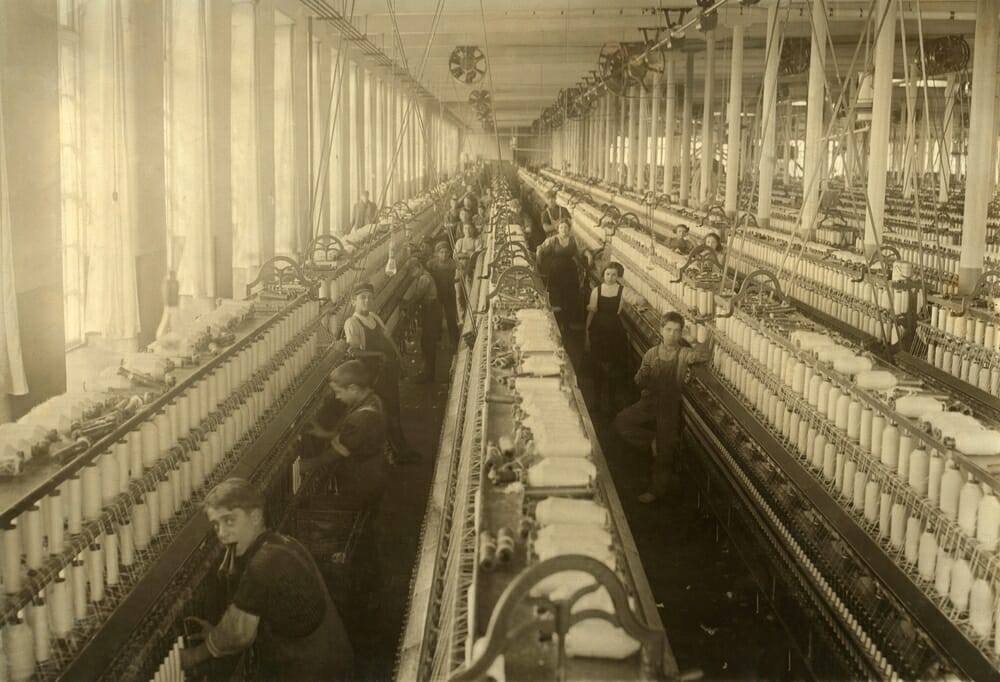 1912 Industrial spinning room. Not actually for linen, but it serves the same purpose. Photo taken in Fall River, Massachusetts by Lewis Hine

The modern centers of high-quality flax production are primarily found in Western European countries and Ukraine.  Linen produces range from lower quality bulk from Eastern Europe and China, to the highest quality which is found in Ireland, Italy, and Belgium.

How Is It Made?

We all known linen to be an expensive textile.  This is due to its difficulty in growing, harvesting, processing, and weaving – all of which are labor-intensive.  Of course, the development of modern mechanization has greatly changed the process, but the steps remain largely the same, just done more efficiently.

The flax plant is grown in loose, high in organic matter, loamy soil.  It does not require the use of many fertilizers and pesticides.  Heavy clays are unsuitable, as are soils of a gravelly or dry sandy nature. Flax is often found growing wild just above the waterline in bogs.

Flax is ready to harvest after about 100 days, this is about a month after the plant's flower, and two weeks after the seeds have formed.  The clear sign is when the base of the plant begins to turn yellow.  There are two methods to harvest the ripe flax plant.  The first is mechanical, where the plant is cut as low as possible for the greatest length of the fiber.  After it is cut and dried a combine then harvests the seeds similar to wheat or oat harvesting.  By hand, the plant is pulled up with the roots to maximize the fiber length.  The flax is then allowed to dry, then the seeds are removed. 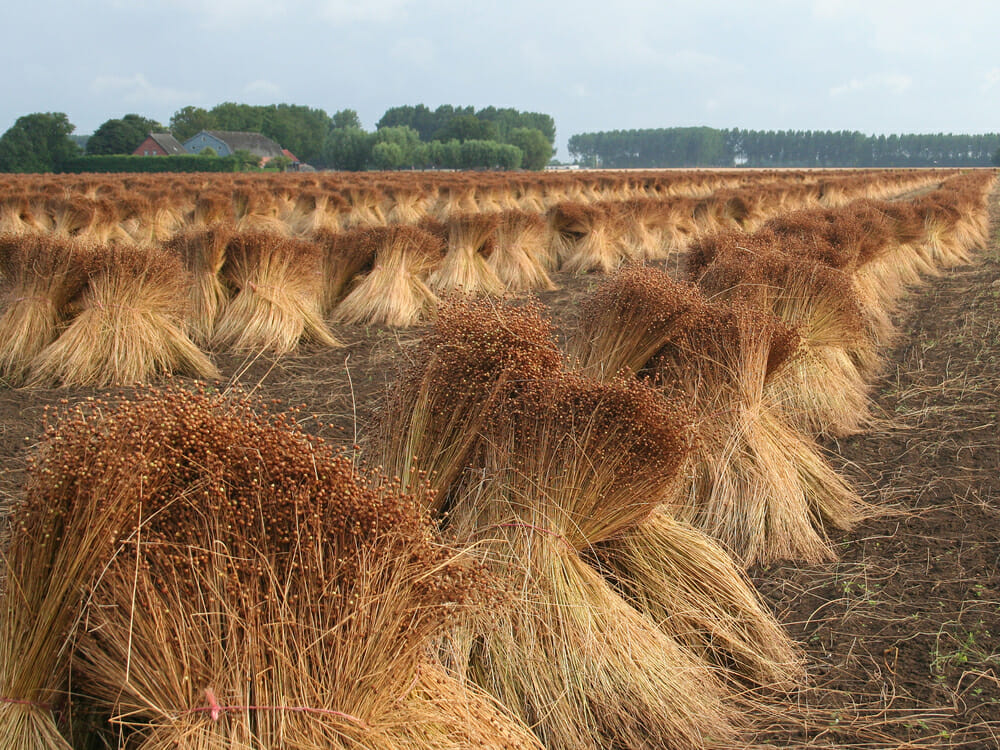 After the flax is threshed (separating the seeds from the straw, either by machine or hand), it is then retted.  Retting is getting the woody center of the flax stalk to rot away, leaving the fibers available.  There are three methods of retting, the most used and the one that yields the highest quality fiber is retting in the field.  Retting in the field is as simple as leaving the cut hay in windrows on the ground to collect dew (and rain) and steam in the sun.  Depending on the climate this can take two weeks or up to two months. When complete the straw is rolled up and moved to processing.

The next step is scutching.  Scutching removes the woody parts of the stalks by crushing them.  This is commonly done between two metal rollers.  The fibers are removed and the other useful parts of the plant are set aside for other uses (linseed, shive, and tow).

Next, the fibers are heckled.  This is where the short fibers are separated with ‘heckling combs' that combs them away, leaving only the long fibers.  Now the fibers are used to be spun into yarns.  This is also a delicate process as the linen fibers cannot stretch, and the individual fibers can break easily.  The yarns are then woven or knit into linen textiles. 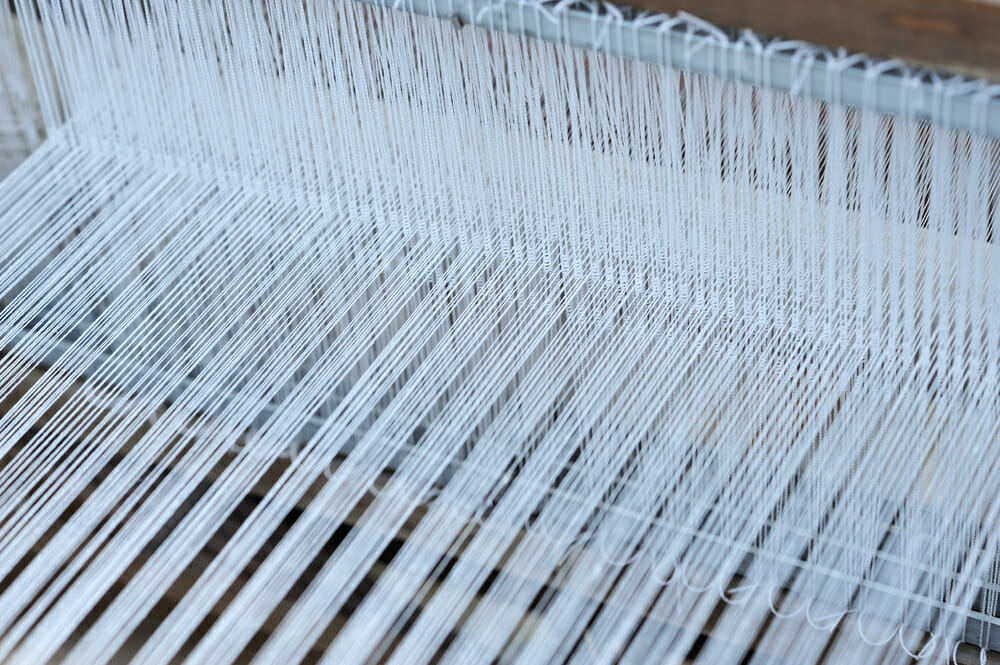 Threads on a linen loom.

Wow… Now I think you can see why linen is so pricey.  Compare all that work to the relatively simple process of spinning cotton or wool!

What Is Linen Used For?

Our use of linen has changed significantly in recent times.  In the 1990s about 70% of linen production was for apparel textiles, compared to the 1970s only about 5% was used for fashion fabrics.

Linen has a diverse range of uses, from bed sheets, tablecloths dish towels, wallpaper, shirts, skirts, and suits, to industrial products like thread, luggage, and canvases – to name a few.  Before more modern synthetics linen was the preferred yarn for hand-sewing, particularly with shoes. 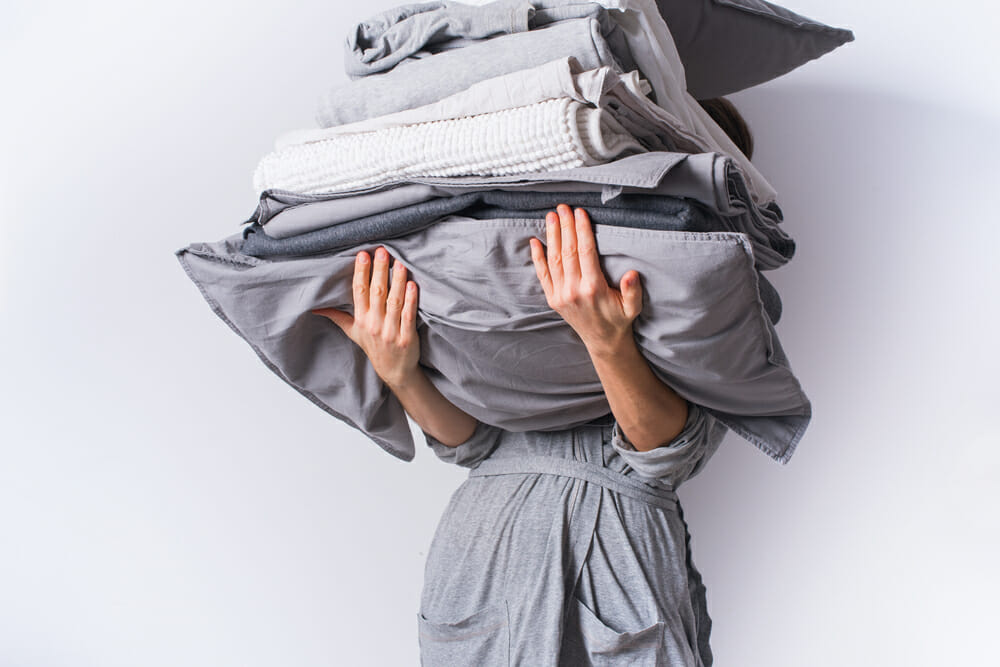 Historically, undergarments, both men's and women's, were often made in linen (if you could afford it).  In the 20th century, the linen handkerchief was the standard decoration of a man's suit.

Linen fabric is one of the traditional supports for oil painting.  Linen is preferred to cotton for its strength, archival integrity, and durability.

In the middle ages, linen was notably used for shields, bowstrings, and gambesons (padded cloth under armor), as well as sometimes for books.

The United States and many other countries use a 25% linen and 75% cotton paper for their currency.

The Future Of Linen

Linen will always have a place in wardrobes across the world.  No other material can match its comfort in hot weather coupled with its durability.  Also, since it is a food crop, there is even more reason to continue to grow the stuff.

However, even with our advanced processing and manufacturing processes, we have yet to find a less time-consuming method to make linen – which means it always will be a low-volume textile with high prices. 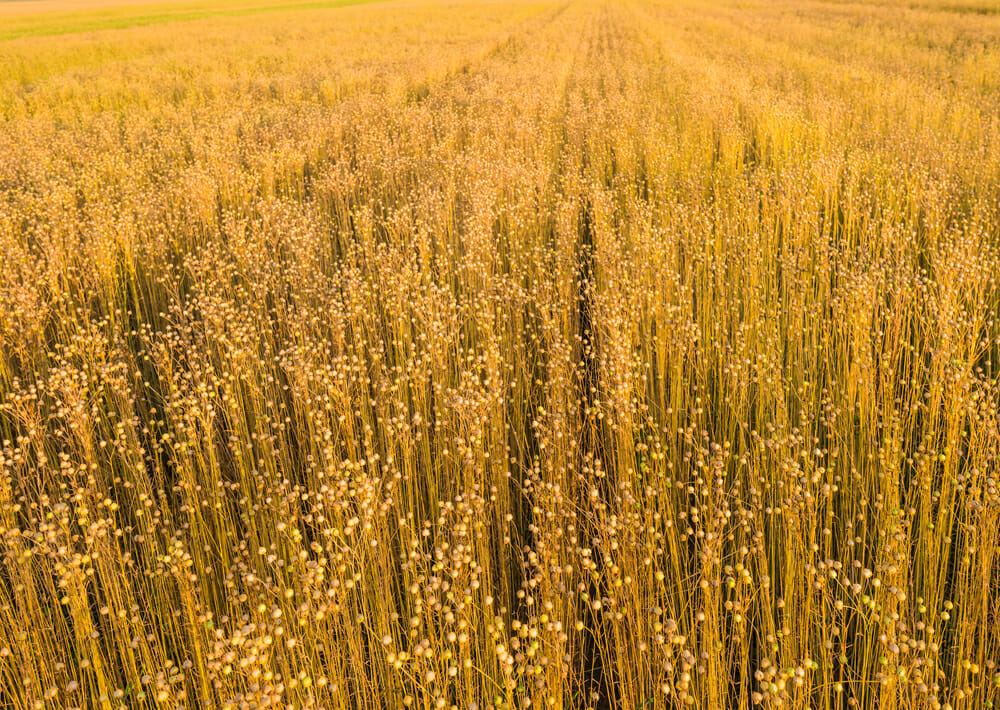 A field of yellow flax.

These problems are unlikely to be solved with genetic modification, or even more automated processing, as so much of the work comes from the simple nature of the plant.  You can't have the fiber without the strong and hard to break apart woody-layers that make it so hard to work with.

Thank you for following this quick history of linen.  Always when talking about history you inevitably have to pick and choose what information to share, otherwise, this simple article would turn into a book! Let me know if I missed anything important and thanks for your feedback on the last  history article.

Comment down below if you have any topics you'd like me to write about.  Anyways, Until Next Time, Happy Sewing!

P.S. Inspired to try out an all linen project?  Check out the Linen V-Top Pattern!

18 Responses to A Super Quick History Of Linen