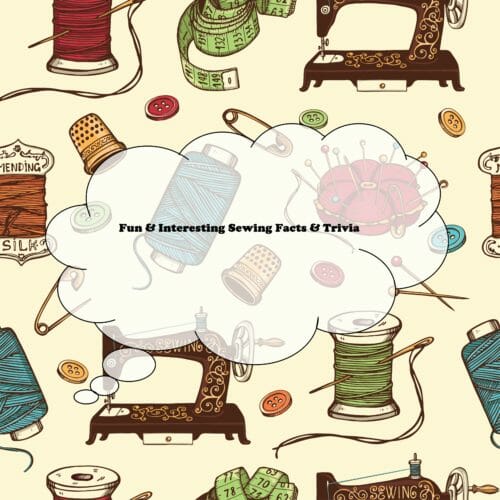 Being a sewing enthusiast you probably already know a lot about selecting fabrics and threads, several types of machine and hand stitches as well as how to select and run maintenance on your sewing machine. Yes, you do know a lot of things about sewing so let's go ahead and add more to your reservoir of sewing knowledge. Sewing Machine Reviews present to you Fun and Interesting Sewing Facts And Trivia you might not know yet.

Hope you enjoyed knowing these sewing facts and trivia as much as I did. I’d love to hear what you know too, please leave us a comment if you have some more bizarre facts about sewing that you wish to share.

At Sewing Machine Reviews, we provide the best independent sewing machine reviews online.  Always check our reviews before you buy that new machine!  Please visit us at sewing-machine-reviews.com.
Feel free to browse around and leave your own sewing machine review if you have one of the models in our list.  We would appreciate your input.  You can simply log in with Facebook, Google+ or Twitter.
Visit Sewing Machine Reviews
Bookmark the permalink.
0 0 votes
Article Rating
Subscribe
Connect with
Login
Connect with
8 Comments
Inline Feedbacks
View all comments

[…] sew for all kinds of reasons. Some, like me, consider sewing as a passionate hobby –which I practice as often as I can. Whereas for others, it can be a […]

Greatly enjoyed the sewing facts and trivia, will share some of these with friends. I also enjoy reading all the various articles each week.

Since I am part Native American (Apache), I know most of your facts about how sewing came about and the early tools used for this very worthwhile craft. I appreciate your writing about them though! Thank you and have a wonderful holiday.

How do I discontinue this newsletter? I should like to but just don’t know how to.

On the very bottom of the newsletter, there is a link called “unsubscribe” hope this helps.

I thoroughly enjoyed your list. Would love to have my mothers old Singer, It was a little portable singer. Wonderful machine. My dad traded it in to Singer in OKC for 2 “modern” LARGE cream and tan ones in the early 60’s.

I have one of the 1947 Singer Featherweight portable machines and it is very durable. If a part breaks, I can have another part replaced at the sewing machine repair shop. I love that machine. It weighs about 11 lbs and you can take it anywhere. It is great for sewing retreats!!