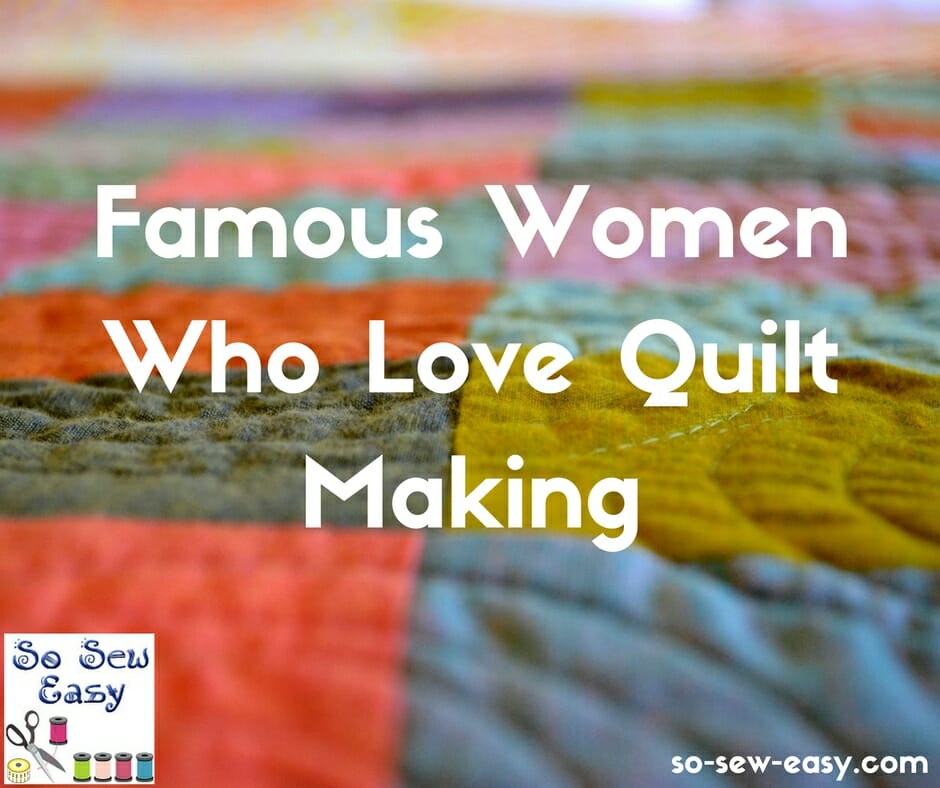 Celebrity role models are quite influential these days –especially for kids and teens who are still in the process of fashioning their own identities.  According to Oliver Goldsmith, people seldom improve when they have no other model but themselves to copy.  This is, of course, also true for adults.  We are often motivated by our role models and this helps us to realize our true potential, overcome barriers or simply do something that we truly enjoy.

“I think the best role models for women are people who are fruitfully and confidently themselves, who bring light into the world.” ― Meryl Streep

We've written recently about Contemporary Quilt Makers who Paint with Fabric and shown you some of the beautiful “light” they have brought into the world.  We've also told you about The Many Amazing Benefits of Quilting so you can better understand all the great physical and psychological benefits that can come from quilting.

Now we'd like to try to give you a little more motivation.  If you're passionate about quilting and you love quilt making, you must be curious who else feels the same way?   Here are just a few names of famous women who love quilt making and with whom you share this wonderful passion! 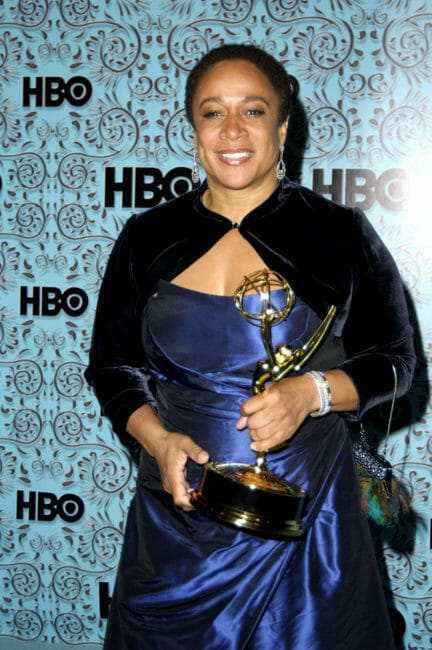 Best known for her role as Lieutenant Anita Van Buren in the TV series Law & Order, S. Epatha Merkerson is a multi award winning actress whose secret love, so to speak, is quilt making  She has distinguished herself by winning acting awards including the Golden Globe, Emmy Award, Screen Actors Guild Award and Obie Award.  Aside from these, she also garnered four NAACP Image Awards and two Tony Award nominations.

It was in a 2008 interview when Merkenson revealed that she is an avid quilt maker.  According to the interview, she made her first quilt when she was broke but wanted to give a birthday present to actor Samuel Jackson’s daughter Zoe. After this experience, quilting became a habit for the talented actress.  She would  give homemade quilted bags to other cast members when they had their opening nights on stage. Using remnant fabrics, her signature quilts bear the names of the recipient.  What a terrific idea which I’m sure that must have been highly appreciated by her colleagues. 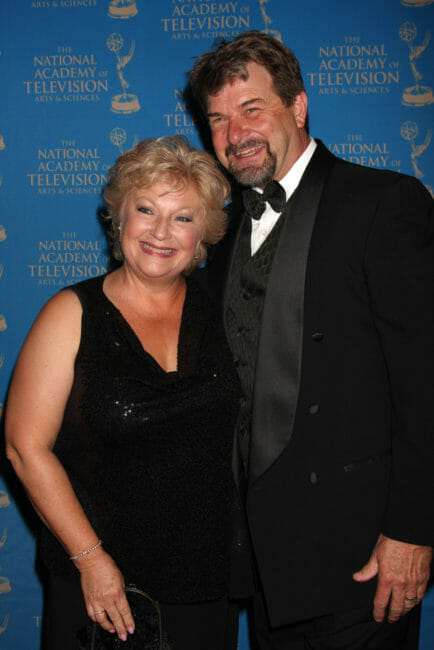 Better known as an Emmy Award winning actress, Beth Maitland is one passionate quilt maker. She made her mark as Traci Abbott on CBS TV's famous series “The Young and the Restless”. Aside from quilting, Maitland also designs costumes, personal and home accessories, jewellery and dolls. Her latest love is long arm quilting and she spends her creative time designing quilt patterns and playing with fabric textures.

As a teenager, Beth was already an accomplished sewist and her love for creating has endured. Declaring in one of her interviews that her happiest quilting moments are free motion quilting, Maitland is an active member of various internet creative communities such as Facebook, Twitter, Etsy, Blog spot and YouTube. 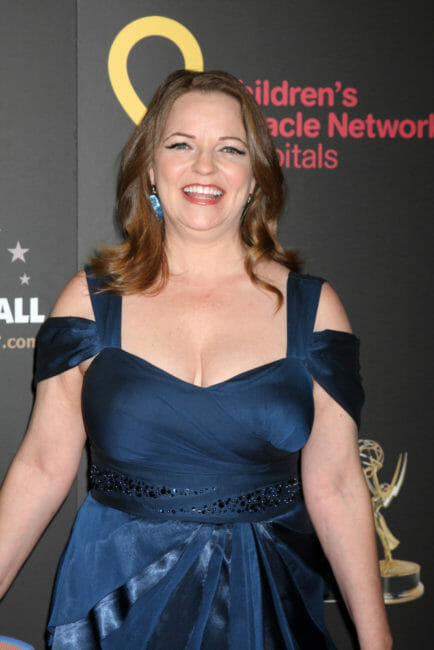 American actress Tricia Cast is most famous for her portrayal of Nina Webster in the top-rated television series “The Young and the Restless”. But her star actually shined in the television series “The Bad News Bears” where she was cast as Amanda Whirlitzer. Born in Bredford, Brookhaven, New York, Tricia is also a theatre actress and has acted in a number of independent films. She won the Daytime Emmy Award for Outstanding Younger Actress in a Drama Series and got a nomination for another category a couple of years later.

After years as television actress, Tricia surprised the public when it was announced that she has requested to be released from her contract. There were a lot of speculations about her decision, but she divulged that she just wanted to take a sabbatical from Hollywood and looks forward to spending quality time with her new husband in Tennessee.  Obviously, she was also looking forward to spend time on her quilting –especially those throw-size quilts that she loves to make. In a recent tweet to a fan that just started quilt making, Tricia wrote, “Have fun- so many ways to express yourself.” 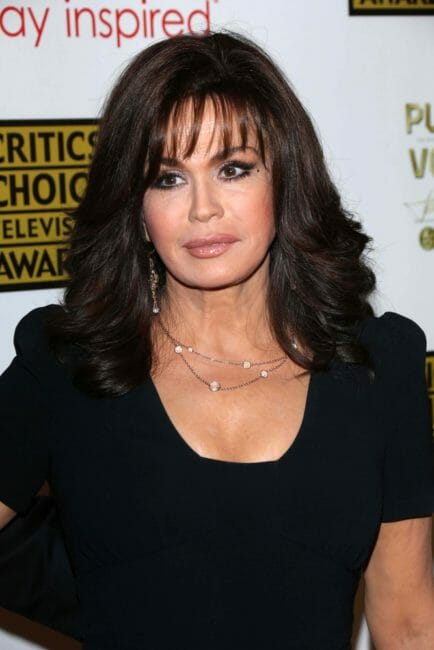 Marie Osmond has many feathers in her cap.  These include being a singer, film screenwriter, actress, doll designer and quilt maker. A member of the famous showbiz family, the Osmond’s, Marie is the only girl in a brood of nine.  Her brothers were regular performers and singers on national television and at the age of four, Marie made her debut as part of The Osmond Brothers act on The Andy Williams Show. Marie later released “Paper Roses”, her first single as a solo artist which became a No. 1 country hit. It also reached the Top 5 on the Billboard magazine pop chart and earned a gold record. The rest, as they say, is history.

In the 1990’s, Marie Osmond showed a different creative side when her doll line debuted on QVC. Her dolls are also sold in retail stores and internet stores in the United States and around the world. Her doll collection has won a number of award nominations such as the Trendsetter of the Year and Awards of Excellence from Dolls magazine.


By 2010, she published the book Marie Osmond’s Heartfelt Giving: Sew and Quilt for Family and Friends. With step-by-step instructions for sewing and quilt projects that she designed herself, there is no doubt that this famous woman is an accomplished quilt maker. Osmond enthused that she loves quilting and that it was her priceless time spent with her mother that made her fall in love with quilting. Marie also declares that quilt making is like a love letter for the future generations- it is more than an art form as it’s the history of family love.

With that, I hope you can find some inspiration and perhaps a role model from among these famous women who love quilt making. I certainly have.

One Response to Famous Women Who Love Quilt Making