Did you see the owl applique I made following the instructions and pattern as one of the projects in the Fun with Fusible Applique course?  He was destined to become a nursery pillow, nothing ‘too cutesy' by request, but still colorful and fun. 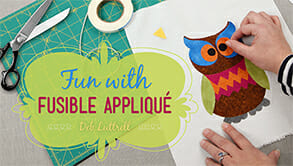 Get the Fun with Fusible Applique Class

If you like the sound of this class and want to find out more, please use this link to purchase.

Check it out now!

But so far he's just on a plain ivory colored cotton panel so I thought he needed a bit more color.  I wanted to make a patchwork border, but couldn't face sewing lots of little squares together!  It's just not me.  Match this fact with my lack of sewing time this week, a raging headache and just being overall in a big rush and he didn't exactly turn out as I had imagined.  Moral of the story – sewing can't be rushed if you want to do it properly.

Watch out everyone, there's another sewing failure on the way!

Ok so I thought this is a quick and not terribly accurate method, but hey, its a cover for a nursery throw pillow, not the Sistine Chapel.  I cut four long strips of fabric 2 1/2 inches wide.  I wanted the final squares to be 2 inches, plus 1/4 inch on either side for the seam allowance.  I cut 2 strips in each fabric and sewed them together along the long sides.  That wasn't too bad.

Then I cut them in half through the middle, and sewed one set to the other.  Now I had 8 squares.  Perfect.  Just roughly what I wanted on each side (not thought it through already).  I cut across to make each 3 inches wide, being 2 inches for the square and then 1/2 inch on each side for the seam allowance.

So now to make a frame around Oliver.  I used my quilting square ruler to decided roughly where the borders should be, drew around, then placed the first strip facing down without even trimming the fabric and sewed a half inch from the edge (I'm rushing here, measuring is for those with more time).  Then I trimmed down to the edge of the patchwork.  First side completed.

I did the same again for the next side, sewed then trimmed, and then repeated again for the 3rd and 4th sides until the border was complete.  I had been hoping it would be quick and easy and give a reasonable enough finish without exact fussing and measuring and lots of tiny pieces.

I'm all for quick and easy – my sewing time is limited.  But well, my lack of planning showed through here – what a mess.  Instead of blindly following those lines I drew,  should have made more of an effort to properly line up the squares in the corners – but in my haste I just wasn't looking.

Here is the cover front all neatly pressed.  Those square don't look very square just yet because they include the seam allowance on the edge.  I'm hoping it will look right/better once completed. (Sigh, too late to turn back now.)

I've just recently made an effort to make some proper piping and learn the correct way to apply it.  In fact, I used this pillow as my example in the how to make and apply piping article.  I had made and used piping before in my Woven Fabric Pillow, but if you look closely, it wasn't exactly perfect and not sewn tight enough to the cord.  This nursery pillow was a gift so I made the extra effort to get a nice finish on the piping this time. (Shame I hadn't made the same effort with the border.)

So I made up some piping and basted it into place on the border edges.

The back of the pillow

As the pillow was for a nursery, I thought it might need to be washed quite often so I just made a simple overlapping envelope on the back so that the cover could be removed easily.  This also means there's no zip that could scratch, no buttons that could come loose.  Plus, I'll be honest, it was also a quick and easy option when I had no time for anything else today.

I made the simple back, placed it on top of the front and matched the edges.

Then I sewed along all 4 sides and carefully around the corners with the zipper foot, making a nice tight seam along the piping for this final pass. Turn it the right way, and it's done.

I decided not to trim the corners on the pillow because often the inserts are a bit floppy in the corners and the seam allowance there helps to keep the corner from collapsing.

So here he is finished.  Actually I like it, but I do feel I should have taken more time and care with the border – that let's it down, especially after I took so much care with my applique in the first place.  But I seriously doubt anyone will ever notice, except me -and you of course.

Do you admit to your sewing mistakes?

Do you always feel it necessary to point out your sewing mistakes?  It drives me mad that sometimes I find it hard to accept a compliment.  If I wear out a dress I made and someone comments how great it looks, I can barely stop myself from saying “Yes it's not bad, but I did make a little pleat in the hemline here, look.”  Why do we do that?  Or maybe it's just me.

Get the Fun with Fusible Applique Class

If you like the sound of this class and want to find out more, please use this link to purchase.

Check it out now!
Authored by: Deby at So Sew Easy
Bookmark the permalink.
« My first quilt – a WIP
My first (and last?) quilt is finished »

9 Responses to Oliver the Owl nursery pillow with piping