Learn Some Quilting Traditions Passed On For Generations

Family quilting traditions have been passed on for generations since the 1600’s or even earlier. In those days, the women (sometimes the men too!) in the family created a quilt as present for a family member who is about to get married or was expecting a child. Quilts were considered as heirlooms and were treasured by the family. As a result, quilting traditions were also cherished and passed on for many generations. I have collected some hand quilting practices for this article and perhaps these cherished traditions could get you started on your own family quilting practice too!

Less popular than African music and dance, the African-American quilting and textile tradition is influenced by four notable African civilizations. When African slaves were heavily trafficked in Southern United States, Central America and the Caribbean, the textile and quilting tradition of four distinct African regions intertwined so that by the time early African American quilting became a distinct tradition, it was already a combination of these varied quilting practices.

In Africa, men worked on textiles and quilts but this practice disappeared when they were brought to the Americas as slaves and the women took over the quilting work. What was left of this practice is the use of reed strips in the African-American quilts.  Also, in the olden times, to be able to recognize people from afar was very important for the many African warring tribes as well as for their hunting parties. For this reason, African quilts utilize bright colors and large shapes in textiles and this is also evident in their quilt making traditions.

Inventiveness and Multiple Uses of Patterns

Changing and recreating old patterns is sacred to many African tribes because it signifies the rebirth of the familial power of the quilt maker.  It also helps to drive evil spirits away who are believed to follow a straight line when they travel. As such, a discontinuity in the pattern is designed to confuse and stall these malevolent spirits. This tradition can been seen in African American quilts that blend famous European American patterns such as the “Diamond Strip,” the “Log Cabin” and the “Wedding Ring” patterns with more traditional designs which are highlighted by the lack of straight lines and asymmetry.

Often in African textiles and quilts, the number of patterns or changes in the pattern directly correlates to the owner's status. This tradition was especially important to royalty members and priests as it conveys prestige, power, status, and wealth to the wearer. Improvisation and multiple patterning also protect the quilter from anyone copying their quilts so that this particular tradition allows for a strong sense of ownership and the expression of creativity.

Harriet Powers‘ Bible Quilt show below made in 1886 is perhaps one of the best examples of this quilting tradition that also preserves African heritage and tells the stories of the bible.  Using the applique technique, characters in the Bible Quilt are attached to a durable fabric. Popular among African tribes, this quilting practice continued up to the early African-American time in the US. Since they record family events like birth, marriage as well as faith and location, it gives us a cultural glimpse of life on the plantation. 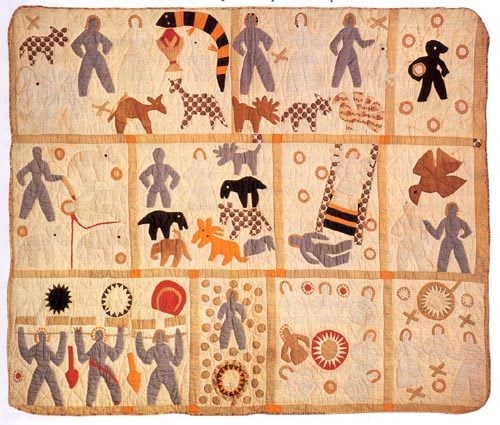 In many African quilts and textiles, the diamond and circle patterns are popular. They symbolize the life cycle where each of the points in the diamond pattern signifies the different life stages such as birth, marriage, rebirth, and others. Protective charms are also used in African quilts and textiles in the form of native scripts and symbols that are stitched into the patterns. These quilts are considered holy and they also represent intellect, power, and knowledge.

The use of charms in quilts is popular among African-American religious societies. These charms are usually made by a medicine woman or a priest and are designed according to the needs of the user and are attached to the quilt. As such, these quilts as said to heal and drive away evil spirits.

I hope you all enjoyed reading about the fascinating quilting traditions of the African-Americans. The second part of this article will be discussing the quilting practices of the European-American quiltmakers so watch out for it!

Read More In Part 2 Below

If you want to help us continue to bring you a wide selection of free sewing patterns and projects, please consider buying us a coffee.  We'd really, really appreciate it.
Bookmark the permalink.
« How to Make Clear Vinyl Zipper Bags
20+ FREE Wrap Top Patterns »

11 Responses to Learn Some Quilting Traditions Passed On For Generations