Are you looking for something to sew for Thanksgiving?

Well, I was.  I just realized that Thanksgiving is only around the corner now.  I was thinking about what I could sew for the occasion and the expression “Turkey Day” came to mind.  Some of my kid's friends refer to the holiday that way.

If you're not from the US, you may not even know about this holiday, but if you're from there or have any good friends that are, you'll certainly understand the importance and some of the traditions around this holiday. 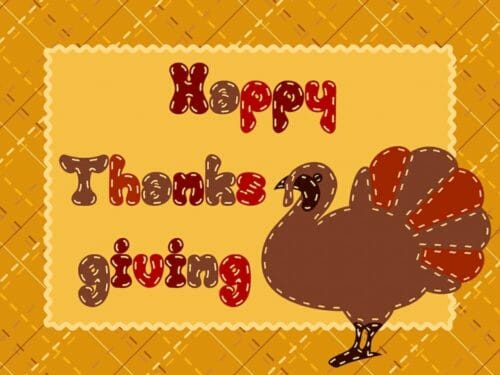 So why are turkeys associated with Thanksgiving anyway?

Anyone who celebrates Thanksgiving is familiar with the star of the evening, the humble turkey.  Most know that tradition to go all the way back to the first pilgrims at the very first Thanksgiving in 1621.  But, shockingly, turkey may have just been one of many types of birds eaten that day, if at all.

An account from Edward Winslow, an English leader, was a part of the first Thanksgiving.  He wrote that the governor sent men to go “fowling”, that is hunting for wild game-birds, while the Native Americans brought five deer.  The pilgrims feasted with the Wampanoag tribe for three days in Plymouth Colony.  Most likely they ate waterfowl like pigeons, geese, and swans.  Although, writing from the governor of the colony mentions that besides waterfowl they had wild turkeys, Indian corn and venison.

If turkey was served we can assume that they prepared it a number of different ways over the long feast.  Roasting on spits above coal fires, stews, soups and various types of stuffing was common for all types of birds.

Over the following century, turkey continued to be one of many different types of meat served at Thanksgiving.  One menu from the time period even explained that roast beef was the preferred main meat for Thanksgiving dinner.  However, beef became harder to get during the revolutionary war and the colonists continued to eat a variety of meats that included turkey.

By the mid to late 19th-century turkey finally took the stage as the centerpiece of the meal.  We have a number of cookbooks naming the turkey as the highlight of the meal.  We don't know the exact reason why, perhaps the farming of turkeys became popular or easier.

During the 1900s turkey became so important to the Thanksgiving tradition that they continued to sell strongly even during the Great depression.  Notably, millions of pounds of turkeys were sent abroad to soldiers in WWII.  The turkey continues to remain the cornerstone of the Thanksgiving dinner to this day.  And a funny piece of trivia for non-Americans; since 1963 one turkey has been pardoned by the president each Thanksgiving.  The tradition started with President John F. Kennedy when he sent back a 55 lbs turkey saying “We'll just let this one grow.”

This fringed table runner makes a wonderful centerpiece for any Thanksgiving or holiday table.

How to Make a Fringed Table Runner in Under an Hour

Here's a list of some of the best turkey sewing projects I could find on the internet. I'm sure you'll love them. Hover over the picture to show the title, click to open, or right-click and open in a new tab to keep this page open too. And don’t forget to pin it.