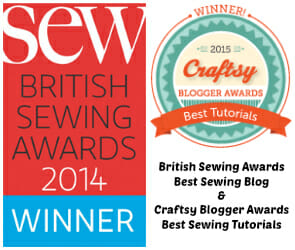 This week I had not one but two pieces of great news. The So Sew Easy site won not one but two awards – I was 100% astonished and delighted and want to thank everyone for the nominations and votes.

First, a recent one you'll all probably remember,  The Craftsy Blogger Awards.  I'm excited to report that So Sew Easy was the winner in the Best Sewing Tutorials category. 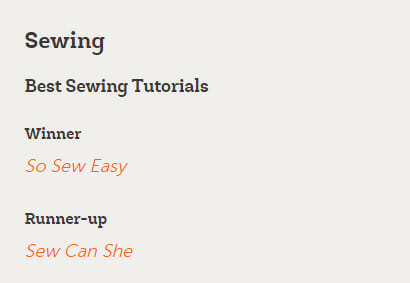 All of the votes and your lovely comments on this awards contest were completely overwhelming and gave me a lump in the throat several times.  My hubby knew it was important to me and when I told him the site had won I don't think I had seen him happier!  He was so delighted for me, and I want to give you all a very big THANK YOU for your efforts. I really would not have done it without you. 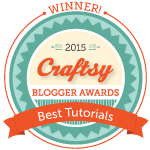 My prize?  I get a ‘badge'  to display on my site shown here and also a free class of my choice.  I'm still deciding on which one.  I'll be honest, I have a lot of classes I've not yet watched and what I would like to win is more time to watch them!

There are a few new classes I have in my wishlist:

Sew Magazine British Sewing Awards. This contest was running for a long time.  Nominations were months ago now and the voting was open for months too.  So although its the Sew Magazine Sewing Blogger of the Year Award for 2014 – the results were only just announced in February of 2015.

I'm delighted that So Sew Easy was the winner in the British Sewing Awards Best Sewing Blog category beating off some very stiff competition from some online sewing celebrities – again all down to your votes.  A HUGE THANK YOU everyone. 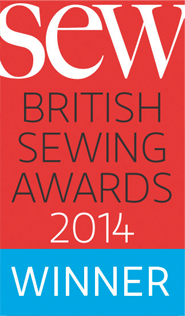 No prize in this one except a warm and fuzzy feeling inside, and they will send me a certificate in the mail, which I will give pride of place on my sewing room wall. This one really was 100% totally unexpected.  I had to read the email several times when it came through to make sure they meant this site had won.

Well I've not suddenly been overwhelmed by new readers, lots of views on the site or offers of work from the big pattern companies or fashion houses (smirk…), so lovely as it is to have all the hard work recognized, nothing here will change.  I'll still be taking classes, learning and improving on my sewing skills, making new sewing patterns and sharing it all with you.  And having a lot of fun doing it.

I hope you'll stick with me on this journey and share some of your own sewing successes and tragedies with us along the way.  Do join us in the sewing forum for chatting, sharing and asking questions and let's make some awesome projects together in 2015.

I did promise that if the site won the Best Sewing Blogger in the British Sewing Awards that I would arrange a big giveaway for this year.  I'm on it!  I'll be writing to all the site sponsors with the good news about the awards and seeing what sewing and fabric prizes I can rustle up for you.  Keep watching this space and hopefully I can collect up some nice prizes to share with you…

In the meantime, thank you everyone from the bottom of my heart.  I really mean it. Winning these awards has been awesome and I would not have done any of this without each and everyone of you.

I would recommend any of Janet Prey’s classes. I was fortunate enough to take two of her courses, which she taught personally. One was an instructors course in which she gave us invaluable information on how to run our own business. She is a very knowledgable lady with a great sense of humour.

Even though I’ve been sewing for over 50 years, I still learn every day, and Janet’s courses are jam packed with info. I love the video format so that I can go back and pick up the finer points I missed the first time viewing. I’ll be signing up for more…

I voted for you for the Craftsy award! Glad to hear you won. I am taking the waistband class now. As a beginner, I think it’s useful, but I think you would probably get more out of the pattern making sloper class for knits. And, personally, I would love to read your review of it!

Big, big congrats, Deby, on both counts 🙂 I highly recommend anything by Janet Pray; though I am an experienced sewer, I was pleasantly surprised by how much I learned from her classes.

Well deserved. I’m delighted to know my vote participated. I love your blog.

Deby – so happy for you! I’m doing the Happy Dance! I look forward to all your great hints and patterns! I bought the ultimate wallet and look forward to making it. I found some of the magnetic clasps that I almost returned – now I can use them for the wallet!

Nice! your blog is my “coup de coeur” of the last month. I just bought a new sewing machine and I’m surfing blogs, Pinterest and Youtube, searching for nice, not to complicated projects but nevetheless elegant and your blog came out, You’re doing a really great job and I’m very happy for you!!!