The History Of Sandals

[Editor's note:  I know, I know.  This article isn't strictly about sewing.  But it's about a topic that relates to fashion and that interests me, so I thought it might interest you too.  I hope you'll like it.  Mayra]

The History Of Sandals

Sandals are a simple open-toed foot covering that has been a part of almost every culture in the world. They are the simplest form of shoe, with the longest history – from Neolithic cavemen to ancient Rome, to feudal Japan, to the modern tourist. The history of sandals features sandal-wearing men and women in some of the most legendary events of history: the conquests of Alexander the Great and Julius Caesar, the birth of philosophy in Athens, the Muslim conquests, the trials of the biblical Hebrews, to name but a few. 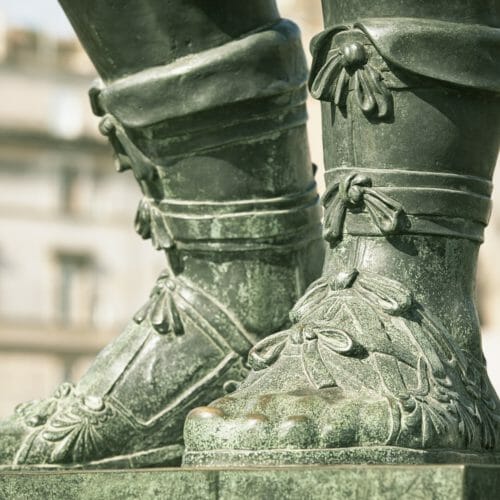 The oldest known piece of footwear is a sandal dating back about 10,900 years from the present. It was found on a site in the modern U.S. state of Oregon. The sandal was made of woven sagebrush bark. It is widely believed that sandals were developed independently across many pre-historic cultures at around the same time.

Most of the European, Levant, East Asian, and Native American peoples are found to have possessed footwear in the late Neolithic era. However, due to the organic nature of the materials, mainly being plant matter and leather, archeological evidence is relatively sparse. One exception to this is ancient Egypt, as the tombs of the great Pharaohs contained many well preserved and decorated examples. 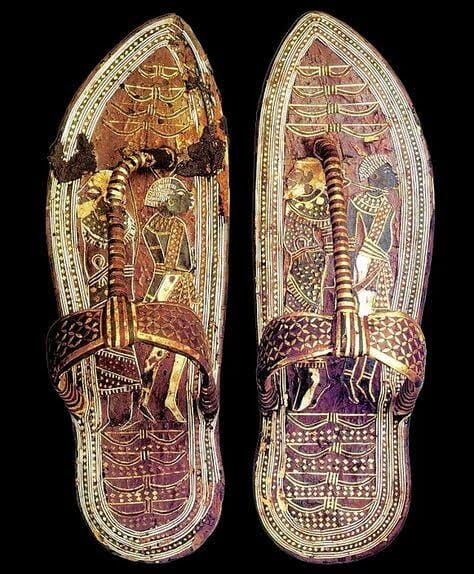 The ancient world of the great Mediterranean empires was quite fond of the sandal. The hot and dry climates of Spain, Italy, Greece, and the Near East were perfect for the breathable shoes. Though closed-toe shoes were known to most of the ancient peoples, in general, they must have been either too expensive, uncomfortable, or unfashionable (probably all three) for we have very few examples of them in their art or tombs.

One of the most well-known examples of the time period is the classic roman sandal. The military version, called the Caligae is the most iconic, with its metal tacks pounded into the soles for grip and stability. 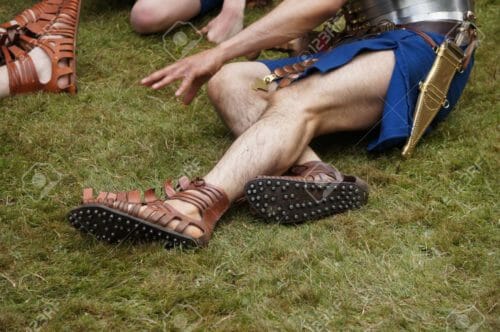 A strange-looking, but widespread sandal of the era, is the Assyrian upturned toe sandal. The curved front supposedly is to help walking, perhaps on sandy terrain. 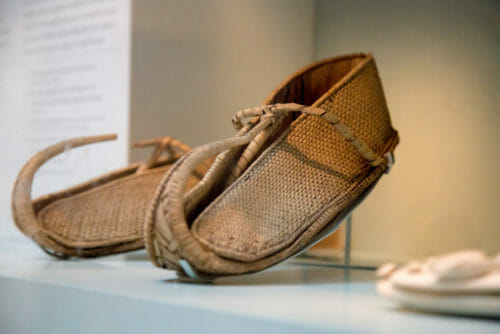 The ancient Greeks preferred a variety of sandals types, usually denoting your rank or profession. Like most fashion, the more ornate or complicated usually accompanied a higher station. Notably, the Greeks are one of the first to add platforms to the sole — usually intended to enhance the wearer's stature or to reflect rank. 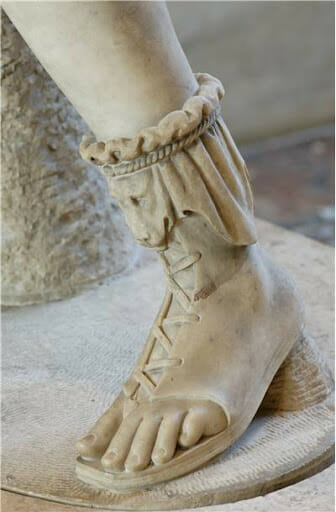 Sandals of the ancient world were practically ubiquitous, especially among the poorer classes. There were few that could even afford a simple sandal of tough leather. We can assume that the majority had to content themselves with simple woven sandals of whatever local material they could find. 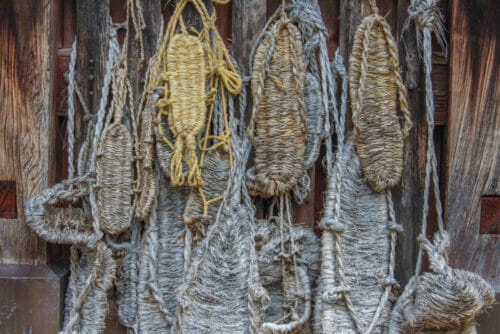 In the western world, the middle ages saw a comparative decline in the use of sandals. This is due to a number of factors. In the military, the boot or closed-toe shoe grew in use. Particularly among the powerful western and northern European kingdoms where the weather was generally wetter and colder. The techniques and tools of shoemaking had advanced enough that cobblers could meet the growing demand. The nobility adopted the closed-toe shoes on mass, partially due to the influence of Christianity in prizing modesty.

However, do keep in mind that this change mainly affected the nobility and the military. The peasantry continued to wear what they could provide for themselves, whether that be simple leather boots or traditional grass sandals.

One interesting development of this era is the Patten shoe. Essentially it is a protective sandal worn over a woman's shoe to protect them from the mud and filth of the unpaved roads. They were worn all the way up to the 20th century.

Jean-Etienne Liotard – A Lady in Turkish Dress and Her Servant 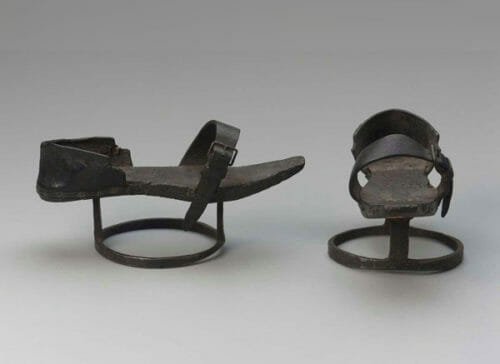 One might think that the use of the sandal has only been limited to places with warm weather. Surprisingly this is not so. Geta, a wooden-soled sandal from Japan, are worn with fabric socks called tabi that keep out wetness and winter's chill. Similarly, the native people of Eastern Siberia and Alaska wear fur boots that originated as sandals tied over fur stockings. At some time in history, the fur stockings were sewn to the soles, creating a boot, but the sandals' straps remained, sewn into the sole seam, and tied around the ankle. 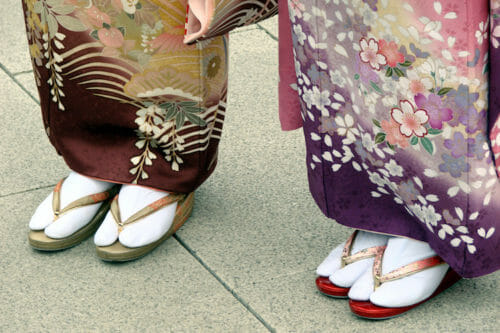 After World War II the sandal has seen a remarkable comeback. This is mainly due to the loosening of dress practices that previously discouraged exposing the feet and toes. Nowadays go to any warm-weather tourist spot and you'll see the majority of people wearing some sort of sandal. 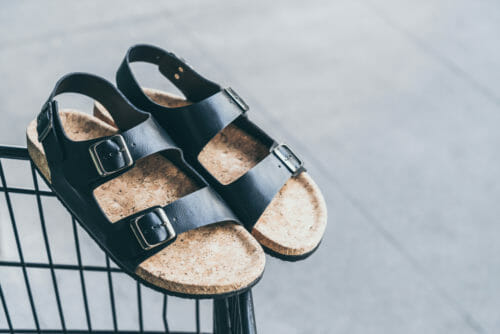 From Asia to the Americas, the simple rubber and plastic flip-flop or thong-style sandal is by far the most common in the world. These are a mainstay of shoe manufacturers in Asia, benefiting from the abundance of labor, rubber, and cheap oil.

Another common style is the resurgent Roman sandal. These vary from the simple mass-produced pairs to the handcrafted made with the softest of leathers. Another return from the past is the raised platform sandals.

If you are really interested in a detailed history of sandals I recommend this blog dedicated to the subject: historyofsandals.blogspot.com

I hope you enjoyed this quick history of sandals. See you next time with another history of…   (please leave your suggestions in the comments below.)

If you like the “history of” articles, please check out The Short History of Polyester Fabric.

The Short History Of Polyester Fabric

If you want to help us continue to bring you a wide selection of free sewing patterns and projects, please consider buying us a coffee.  We'd really, really appreciate it.
Bookmark the permalink.
« Top 5 Sewing Books for Beginners
Micro Boston Bag Pattern – Using Your Scraps »

18 Responses to The History Of Sandals