A Brief History Of Fabric

Well, there’s just so much to say about the history of fabric…It’s almost as basic a human need as food or shelter, truly. Where would we be without our clothing, our blankets, our sofas, our mattresses, our curtains? The list goes on and on.

Indeed, many of us might not have been drawn to the art of sewing and the love of fashion were it not for the wealth of rich and intricate fabrics, the variety of textures and colors available for us to experiment with and express ourselves through. And that doesn’t just go for sewists and fashionistas, the number of industries which benefit from the myriad fabric types made available by development is staggering.

Throughout the ages, clothing has been a reflection of both the resources available to a civilisation and the level of technology in use by that civilisation; whereas the actual fashions tend to speak volumes about the state of culture in a place and the social standing of the persons wearing them.  Ultimately, the available fabrics in a society dictate how people will clothe themselves and decorate their environment.

Fabrics first appeared in the middle east during the stone age and there is evidence to support the wearing of clothes as far back as 500,000 years, although those would have consisted of skins, furs, and reeds. The earliest sewing needle to have been found dates back to France about 19 000 BC but possible needles have been found which date back an astounding 40,000 years. Dyed flax fibres found in a prehistoric cave n Georgia, Eurasia have been dated to 36,000 years ago. Evidence has been found of weaving in the Czech Republic, in the form of impressions of textiles, baskets, and nets on clay dating back as far as 27,000 years. 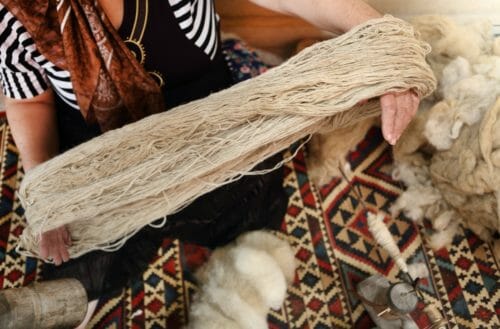 The basis of any fabric is, of course, the textile, which consists of either felt or spun fibres which are made into yarn. The yarn can be woven, netted, knitted or laced, interlaced or felted to form a fabric.

Believe it or not, synthetic fibres were only invented a century ago, mainly to combat the age-old problems of wrinkling and lack of elasticity. Attempts were being made to synthesise fibres for 200 years before that, but the synthesised petroleum compounds and chemistry necessary only reached that level a century ago. It's amazing to think that Nylon was only invented in 1939!

Advancements will continue as long as technology does and that means heating and cooling fabrics, color changing fabrics and illuminating fabrics for us in the future! But the classic, natural fabrics are hard to beat and I’m confident silk and cotton will never go out of use, there's just something special about a hand woven fabric, worked in the ancient way.

Wool: Herding of sheep dates back to about 10 000 BC, the animals were kept for meat rather than wool but over time, as breeding techniques resulted in higher quality livestock, the quality of the wool improved to the point where fibres grew long enough to spin and in around 5 000 BC the art became more popular. 2000 years later, on account of the diversity of sheep breeds, there were more than 200 types of wool available in Europe.

Linen: This material was first produced in Egypt, around 5000BC. Wild flax is placed or spun to make yarn. Linen was the clothing of Pharaohs and the dead, in the form of dresses, shirts and bandages. Linen gained popularity and spread throughout the world. In Roman times it gained popularity for use in underwear and by the middle ages the words linen and underwear were synonymous. Nowadays however, linen and bedclothes are synonymous for obvious reasons.

Silk:  You guessed it, silk is the product of, the silk worm! Dated back to China around 2500BC, silk is a protein fibre used by the worms to make their cocoons. The triangular protein molecules act like prisms and refract the light which hits the silk, producing silk's incredible shine and color-play. The best fibres come from the Mulberry silk worm and mulberry trees are native China and Japan, indeed, it was the emperor during the Han Dynasty, around 114 BC, who began the legendary silk-route, the king of all trade routes.

For more on silk, please check out this article on Smooth and Shimmery Silk Satin:

Cotton:  Grown around the seeds of the sturdy cotton plant, cotton was being spun and woven in ancient China, India, and Egypt as far back as 5000 BC. Cotton fields were planted in India around 400 BC on a massive scale, with huge cotton rolling machines to prepare the fibres. The cotton looms of the late 1800s and onward revolutionalized the cotton industry.

To learn more about the History of Cotton, please see this article:

The oldest form of fabric manufacture is felting, squeezing a mat of fibres together in a liquid to achieve a flat, tangled finished material. After that came knitting, the interlacing of yarn using a needle. Then came weaving, making use of a complex loom or rectangular frame where strands of yarn are hung and then interlaced.

The ancient methods of working textiles, knitting, felting, plain weave, satin weave and twill, have changed very little since ancient times; although the transport system, dyes available to us and the complex machinery in use means that the scale and speed of production have increased exponentially.

The yarn can be dyed the chosen color before working and sometimes the fabric is made and then dyed. Other methods of colouring include the interlacing of different colored strands, bleaching, stitching colors through existing fabric and printing onto the fabric.

Nowadays the variety of colors available to us is staggering. The history of fabric dyes is an interesting and complex one and would likely require an entire article of its own. Suffice it to say there used to be limits…consider cultures like the Buddhist culture where only six natural substances are allowed for use in clothing dye. There were times when the color of the fabric was a clear reflection of status, a symbol of what you could afford.

To understand more about one of the several traditional ways to dye fabric, please read this article on the Ancient Art of Batik Printing.

If you want to help us continue to bring you a wide selection of free sewing patterns and projects, please consider buying us a coffee.  We'd really, really appreciate it.
Bookmark the permalink.
1 1 vote
Article Rating
Subscribe
Connect with
Login
Connect with
2 Comments
Inline Feedbacks
View all comments

Just wanted to thank Debbie for the invisible zip tutorial, it’s been difficult to put in my zip but this gave me more confidence to get on and get it finished.