« Spreading the gift of sewing
What if you won free fabric for the rest of your life? »

Types of Bra Patterns you can sew

Did you see my earlier article about sewing your own bras and underwear?  We'll be running a series of interesting articles on this subject and I'd encourage you to give it a try – honestly bras are a lot easier than you might think!  Here's our earlier introductory article in case you missed it. What you need to sew a bra…

There are quite a few bra patterns available to the home sewist. In this post, we’ll look at different types of patterns. We’ll also look at which pattern you might want to choose for yourself.

The first two categories are similar to what you’ll find in Ready-to-Wear – either underwired, or non-underwired. Let’s look at the non-underwired category first.

Non-underwired bras are often called soft-cup bras or bralettes because they have nothing hard (like a wire) and they also give a softer more natural shape. This type of bra is best for a smaller busted woman, say A or B cup, however, they can be worn by a woman with a larger cup size if she is self-supporting.

Here are some examples of a soft-cupped bra or bralettes:

This first bra you can see is non-wired. 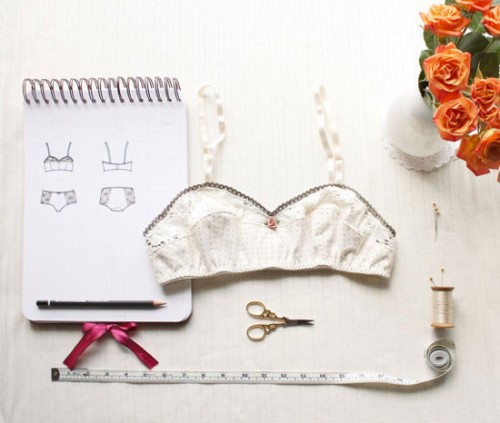 This is Ohhh Lulu's Bambi Soft Bra. You can see how very soft both the shape the bra is, and the shape it would give. Soft bras and bralettes, although incredibly comfortable and fine for smaller busted women, really won't offer the support a larger-busted woman will need. You can find the Bambi Bra pattern at Ohhh Lulu's Etsy Shop.

Craftsy's Lingerie sewing guide features this Bambi with a step by step you might find useful. Get the free lingerie e-book download here.

This is the Watson bra and panty set. This soft bra does have more shaping too it and thus will offer more support, but again, as a general rule, these soft bras are best for smaller busts or self-supporting busts.

You can purchase the pattern for this bra set at Cloth Habit's website.

The Foam cup bras are most commonly known as T-shirt bras. Yes, you can make your own T-shirt bra! There are a couple of ways to go about this – you can buy pre-made foam cups and make your bra from there. You can also bye foam and cut the bra cup from that – that is called Cut and Sew. Both will give that smooth foam shape under your clothing.

Most bras with foam cups have underwires. Here are some examples of Foam Cup Bra patterns.

Here's a pattern from Pin-up Girls. This type of pattern is the first type I mentioned – the one you by the pre-formed foam cups and insert them into the bra you're making. This is available both at Bra-Makers Supply and their Etsy store.

And example of the second type of foam bras comes from MakeBra. MakeBra uses foam which is cut and sewn to make the foam cups. Here's an example of their Ulla bra. 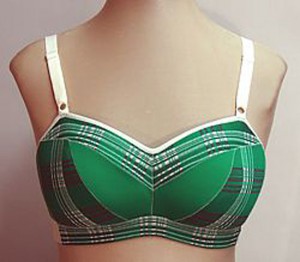 You can purchase this pattern and many others on their website.

The final bra patterns we’re going to look at are Partial Band and Full Band.

The Partial Band pattern gets its name from the type of band it has – a band only partially going around the body. This type of bra has the band attached to the bottom of the cups but not under the bridge or center of the bra.

Here are some examples of this type of pattern:

The first pattern is Elan 540. 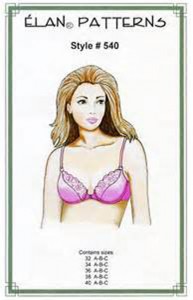 This is a front closing bra, and the band does not go all the way around in this. This type of bra is better for smaller bust, or self-supporting busts. You can find this Elan bra at Sew Sassy's website.

Another example of a Partial Band bra is the Linda bra from Pin-up Girls.

This bra is a back-closing bra, but you can see the band attaches to the sides of the cups and doesn't run underneath the cups and the bridge. Again, you can find this bra at Bra-Makers Supply or their Etsy shop.

A Full Band, like it’s Partial Band sister, is also just what it sounds like – a full band that wraps completely around the body with no breaks in it – the only break being where the bra fastens. Full Band bras are usually for the more full-figured women, but are also a great option for the small-framed woman who is fuller busted.

There are a lot of Full Band bra patterns. So many, it's rather hard to choose just one or two, but I'll try.

A very popular pattern by Orange Lingerie (available in their Etsy shop)is the Marlborough pattern.

You can see on this bra the band runs continuously from one side where the closure is to the other side. This type of the bra style is the most supportive.

Another example of this (and my favorite pattern) is another Pin-up Girls pattern – the Shelley pattern. 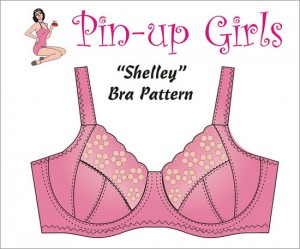 In this photo, you can see clearly how the band runs all around the bra – thus a Full Band bra.

If you've thought of making a bra, but haven't dove in yet, I hope this article encourages you. There are so many more patterns out there too. Here's a link to where to buy bra-making supplies all over the globe: 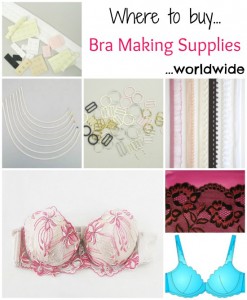 All photos belong to their respective pattern companies.

I’ll be back again soon to share more with you about sewing your own bras and lingerie.  In the meantime, check out Deby's previous bra sewing articles, to see how she got on with her first bras.

Hi, I'm Michelle. I'm married and a mum to two grown boys, and a pup. I love sewing, I love making things myself. I think I've tried to make just about everything from clothing, to jewelry, to cosmetics. Some of those things have turned out better than others, and some of those have become a source of great joy for me. I have a blog where I share some of the things I make: Michelle's Creations.
More about Michelle and Michelle's Creations
Bookmark the permalink.
« Spreading the gift of sewing
What if you won free fabric for the rest of your life? »

9 Responses to Types of Bra Patterns you can sew